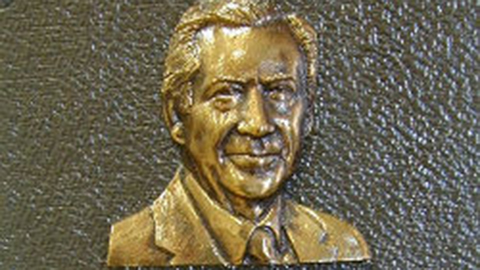 Emily Shoemaker gives a history of her husband Merhl and the beginning of the Friends of the Library.

This is Emily Shoemaker [speaking]. My husband, Merhl and I were very active in the beginnings of Palm Coast and I have been asked to record some of my memories. A brief aside… Merhl and I met when I was in Red Cross work in Italy and Merhl was in the Army stationed in Leghorn, Italy.

In the early 1970’s Merhl and I were living in Ridgewood, N.J., settled down (we thought) after many moves back and forth between Baltimore and Houston, Stanford, C.N., New York City due to Merhl’s job with a large chemical Company. There was an article in the Bergen Evening Record about a new development planned by ITT in Florida, to be “environmentally correct.” Since Merhl’s sport was horse racing, our normal plan was to spend some vacation time in Florida each winter to go to the track. That year we stopped to see what was going on in Palm Coast. Not much, but [we] decided to buy some property there. We couldn’t buy it outright. ITT insisted on selling it only on a time basis. I specifically remember our property was pointed out, far from a dirt road, up in the woods a piece.

When Merhl became very fed up with the business world, he decided to take early retirement and we built a house and moved to Palm Coast in early 1974. At that time there were some families that had lived there about a year, all in the “C” Section. Ours was one of the first non-ICDC homes in the “F” Section. We rode our bikes every evening after dinner with our neighbor, Winnie Flanagan (who later was a great help in starting the Friends of the Library). We often rode our bikes to the top of the hill (where Palm Coast Parkway dead ended with a pile of dirt) and enjoyed looking down to watch the traffic on I 95. There was also a big pile of dirt near there where Old King’s Road dead ended. It was the only entry to Palm Coast from Route 100. We especially enjoyed the beautiful, billowy clouds and blue skies of country living. Amenities were few. Our mail was delivered from Flagler Beach in a pick up truck to the Handy Way convenience store, where we went to claim it. The Handy Way was where we could buy milk and bread, but not much else. Once a week we drove down A1A to Ormond Beach for necessities. I remember one time when shopping; I locked my car keys in the car, but knew I would soon see someone from Palm Coast who could take me home. Very soon Gordon Kip, who worked for ICDC, came along and transported me and my groceries home. He even drove me back to my car in Ormond.

Wherever we had moved, before coming to Palm Coast, I had always been involved in the League of Women Voters. When I found that there was no local group, I joined the League in Daytona Beach. Merhl and I started attending Flagler County Commission meetings to learn about the County. Also, I was able to get the Daytona League to conduct “Candidate’s Night” in Flagler County. Otis Hunter from Espanola was our County Commissioner and as a result of attending the Commission Meetings, Otis appointed Merhl to the Planning and Zoning Committee as the representative from Palm Coast and subsequently appointed me to the Environmental Committee of the North East Florida Regional Planning Council. Otis Hunter’s County Commission term was to end in 1976 and Merhl told him he was thinking of running. Otis said that he would like one more four year term, and if Merhl would support him, Otis in turn would support Merhl for County Commissioner in 1980. It was an ideal combination, support from both the Palm Coast newcomers and the west side of the County which was primarily agricultural. This began a very interesting and busy twelve years of our lives, until Merhl was not able to run for Commissioner in 1993 because of health concerns. We moved to Melbourne to be closer to our daughter and her family.

Perhaps the most all consuming, interesting and personally rewarding was working to establish the Public Library in Flagler County. When we moved to Flagler County, the only library was in Flagler Beach. We paid their fee and were glad it was there. But Merhl felt strongly that there should be a free, County Library available to all. We got involved with the State Library in Tallahassee, and with their leadership and the help of many, we were able to take a few short steps in that direction. For example, a small group from the Women’s Club (including Winnie Flanagan) asked Merhl to help them establish a library. We started storing donated books in garages and extra rooms. Dr. Jack and Augusta Dunn offered a house that they had recently vacated. We filled that up and then the house sold. We had to get the books out in a hurry. The only County building available was in the Hammock. Jamie Likens helped set up a short lived lending library there. We transferred the books up the Intra Coastal [Waterway] on Bill Tarkin’s boat. Soon after, there was a fire in the Community Center and we had to make other plans.

Merhl was on the Board of Trustees of Daytona Beach Community College and told the president, Dr. Charles Pope of our need for space. Dr. Pope said that he was planning to open some college classrooms in a store front in Palm Harbor Shopping Center, which would include some shelves for reference books. We were able to use the remaining unused shelves for our library. The space was free and the air conditioning paid for by the College, which also supplied staff “know how” in setting up a library.

Merhl and I had gone to Tallahassee several times and made contact with the Florida Library Association and the State Friends of the Library group, who were extremely helpful in getting us started and keeping us going on building a library. Merhl eventually became the President of the State Friends group and he and I were honored in 1988 with the “Volunteer of the Year Award”. I remember Sandra Rose and Sidney Friedman attending the ceremony with us in Miami Beach. They had been very involved in the library since their arrival, but that is a story they should tell.

Some additional interesting facts from my clippings that I haven’t mentioned: one is that the Library Building opened in June 1983. The County got a $40,000 grant from the State and matched it. Paper backed book sales financed new book purchases. We started with 5,000 books and an all volunteer staff. Betty Miller, a retired executive librarian and four more retired librarians were each in charge of one day a week, volunteers all. In March 1986 the County Commission requested $50,000 from the State Legislatures to be matched by the County. The Library was then staffed with 100 volunteers.

When the Friends of the Library turned the Library and its contents over to the County, the total assets were more than $400,000 in replacement value. ICDC donated the site for the Library in 1982. The building is now being used as offices for the City of Palm Coast, I believe. The original building was 2,200 square feet. The Library had the support of most, if not all of the local clubs and there were many. The newspaper coverage was excellent because our neighbor Jim Miskelly and our friend, Jamie Likens both wrote for the local paper. We also had the support of the developer, who viewed the Library as a positive element of the community.

In thinking about the beginnings of Palm Coast and the Library in Flagler County, I have refreshed my memory with my three thick notebooks of newspaper pictures and articles that I have from our twenty years in Palm Coast, the best and most gratifying years of our lives. Since leaving Palm Coast in 1993, in order to be closer to one of our daughters and her family, I have subscribed to the newspapers in Flagler County, so I feel that I am still in touch. When I attended the opening of Flagler County’s new, magnificent Library, I was reminded that “big oaks from little acorns grow with regular nurturing along the way.” Doing this report has brought back wonderful memories. I thank you for including me in your project. Thanks again, from Emily Shoemaker.

The Flagler County Historical Society is creating a fundraiser to obtain a Sea Turtle to be placed in front of the Holden House Museum as a new member of the Turtle Trail. The theme will consist of a combination of…
END_OF_DOCUMENT_TOKEN_TO_BE_REPLACED
18 Nov