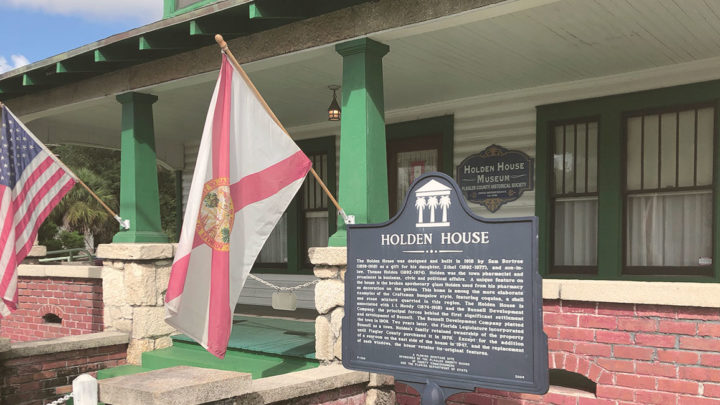 The Holden House, home of the Flagler County Historical Society, is located on the north side of SR 100 (204 East Moody Boulevard) between Church and Pine Streets in Bunnell. The Building occupies Lot 12 of Block 134 of the original town plat. It is situated across Moody Boulevard from the old Flagler County Courthouse.

The circa 1918 Holden House was constructed by Samuel Merwin Bortree for his daughter, Ethel Lura Bortree and her husband, Tom Edward Holden. Holden was the town pharmacist and actively involved in local business, civic and political affairs

The Holden’s raised their two daughters, Altajane and Eleanor (called Tommie) in the house, and continued to reside there until the 1970’s.  The room to the east of the living room was used for their music room. The sun porch was added during the mid-1930’s and Mrs. Holden had the floor of the porch painted in bright colors depicting the sun rising.

The kitchen is much the same except for the addition of a modern stove and refrigerator. The room off the kitchen was originally used as Mrs. Holden’s sewing room and a play room for the children. The bathroom downstairs was added in later years. Upstairs, the house, when built, had one of the few indoor bathrooms in Bunnell and it boasted a tiled floor using the small hexagon shaped tiles such as the design used in the Holden Drugstore. The bedroom on the west side upstairs was Tommie’s bedroom and the room at the north side upstairs was Altajane’s bedroom. The upstairs front room was the Holden’s bedroom and opened to a screened porch

When the house was built the front gable over the front porch was inset with pieces of apothecary bottles. When the sun porch was added the gable there was inset with antique colored glass, old pieces of dishes and even an automobile tail light or two thrown in for good measure. The house is partly furnished as it would have been in the 1920’s with the Society on a quest for additional period furniture having Flagler County connections.

In addition to managing the Holden House Museum, The Flagler County Historical Society operates a museum and a unique research library in an annex behind the house. The annex contains clothing, furniture and other artifacts of early Flagler County along with many fine collections including bound volumes of The Flagler Tribune, 1918-1980; copies of the Bunnell Home Builder, 1912-1918; early Florida, St Johns and Flagler County maps; over 125 matted and framed photographs of the early years; over 6,000 alphabetized obituaries published in area newspaper; individual files on early Flagler; individual files with information on Flagler places and organizations; and a searchable computer family database of over 235,000 names from Northern Florida and Southern Georgia.

Historical Photographs of the Holden House

A special collection was prepared by the Flagler County History society and is now on display at the Flagler County Administration building including pieces of china used by early resident General Jose Mariano Hernandez to entertain in Washington while he was a delegate to the 17th Congress (1822-1823) and some recreational items used by Henry Mason Cutting at his “Cherokee Grove” Lodge now known as the Princess Place.  Hernandez Collection

The Flagler County Historical Society is creating a fundraiser to obtain a Sea Turtle to be placed in front of the Holden House Museum as a new member of the Turtle Trail. The theme will consist of a combination of…
END_OF_DOCUMENT_TOKEN_TO_BE_REPLACED
18 Nov