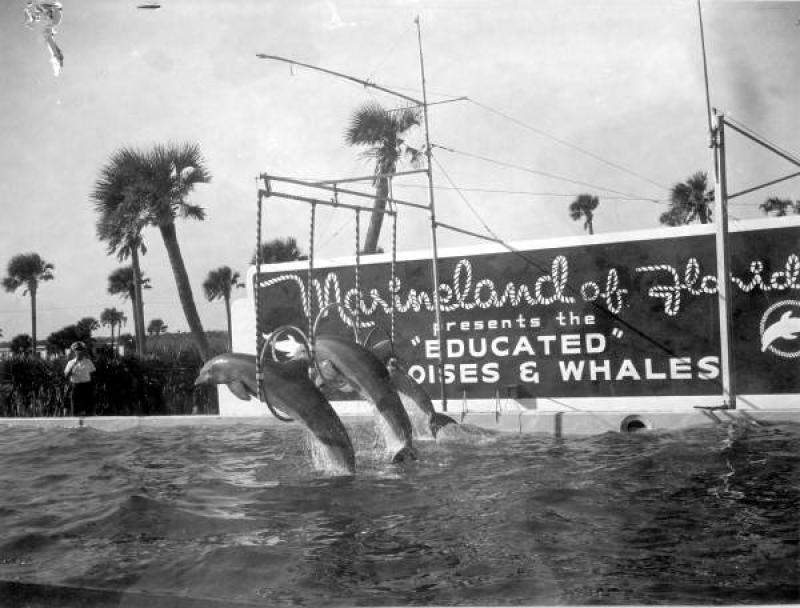 Marineland opened in 1938 as the world’s first underwater motion picture studio. A new word, “oceanarium,” was coined to describe it – denoting a place where various species of marine life lived together, as they do in the sea, rather than kept segregated, as they had traditionally been in aquaria.

The founding group of “Marine Studios” – the original name given the facility – included men who shared an interest in film making and exploring and who had ties to some of the great American fortunes: W. Douglas Burden, a great-great-grandson of Commodore Cornelius Vanderbilt, was a trustee of the American Museum of Natural History; his cousin, Cornelius Vanderbilt Whitney, also a museum trustee, was chairman of Pan American Airways and involved in making the motion picture classic “Gone With the Wind;” Sherman Pratt, whose grandfather was one of the partners of John D. Rockefeller in Standard Oil and was connected with RKO pictures and an active member of the Explorers Club; and Count Ilia Tolstoy, grandson of the Russian novelist, Leo Tolstoy, who shared with his cofounders an interest in natural history and film-making.

Two notable early visitors to Marine Studios were First Lady Eleanor Roosevelt, who wrote about it in her syndicated newspaper column, “My Day,” and correspondent Ernie Pyle, who proclaimed it “something absolutely new in Florida.”

William Rose Benet was inspired by Marineland to write a children’s book about dolphins, and also mentioned Marineland in his autobiographical The Dust Which Is God, which won the Pulitzer Prize for poetry. Humorist Robert Benchley, (whose grandson, Peter Benchley, would later write the best-selling novel Jaws) came so often that he was proclaimed honorary mayor of Marineland. Its literary connections continued after World War II when the operation of the Dolphin Restaurant at Marineland was taken over by Norton Baskin, husband of Pulitzer Prize-winning novelist Marjorie Kinnan Rawlings.

The Flagler County Historical Society is creating a fundraiser to obtain a Sea Turtle to be placed in front of the Holden House Museum as a new member of the Turtle Trail. The theme will consist of a combination of…
END_OF_DOCUMENT_TOKEN_TO_BE_REPLACED
18 Nov