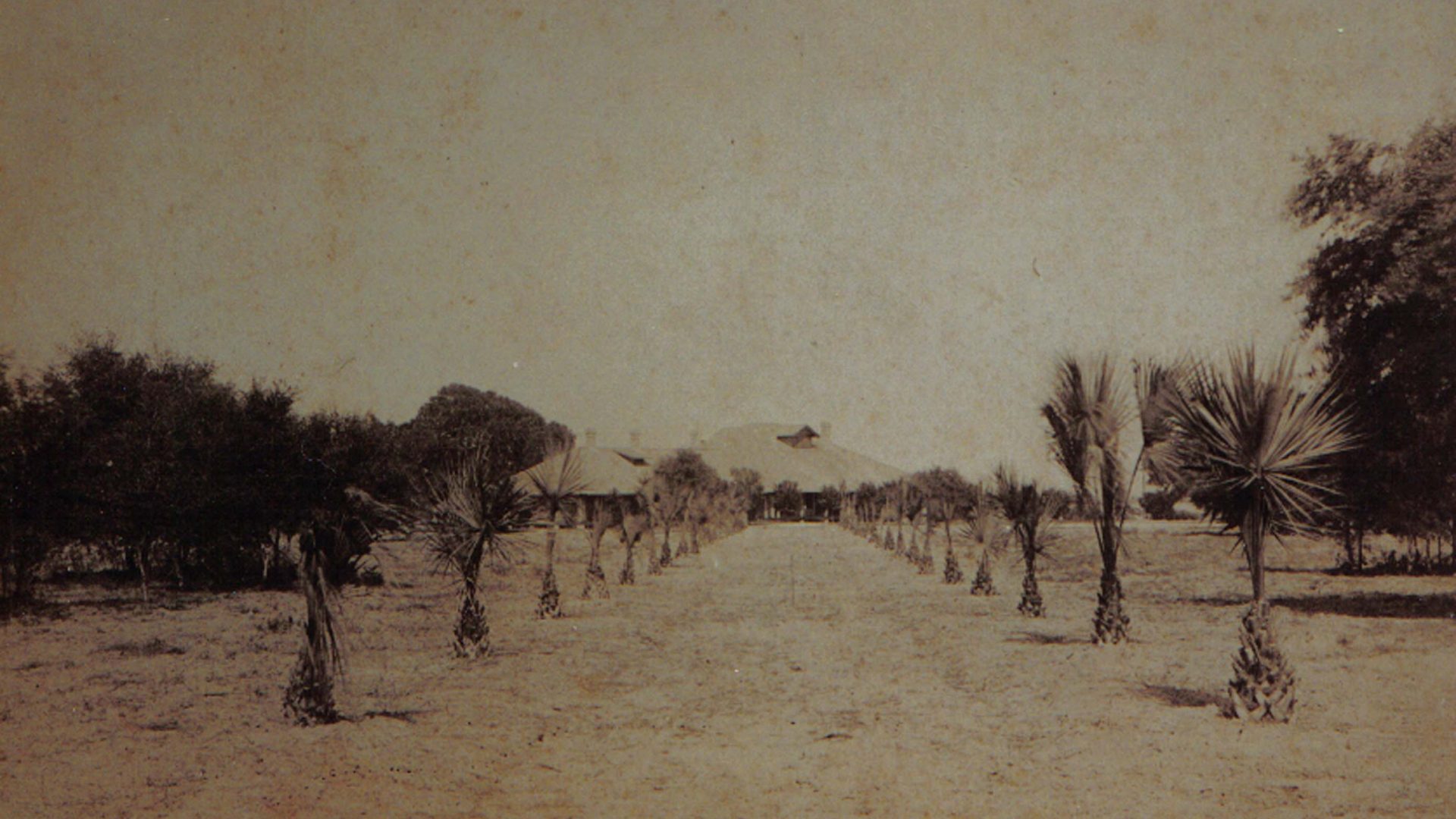 Once upon a time…a princess lived here

View a tour of Princess Place with George Hanns

Cherokee Grove was the original name for this area. Cherokee Grove was part of Francisco Pellicer’s land grant from the King of Spain in 1791. In the early 1800s, H.C. Sloggett introduced orange trees to Cherokee Grove, one of the first orange grove locations in Florida. In 1886, Henry Cutting, a New England sportsman, purchased the grove and surrounding property.

In 1887, Henry Cutting constructed a hunting lodge on the property which was designed by New York architect William Wright in the Adirondack Camp Style. The Camp Style originated in the Adirondack Mountains of upstate New York. The Princess Place lodge is probably the only example of this style of architecture in Florida.

The lodge is an excellent example of the adaptation of the style to local materials. The lodge was constructed from pink coquina mined from the beaches in Flagler County. The wraparound porch is supported by cedar and palm trunks serving as the columns. Besides riding stables and tennis courts, the first in·ground swimming pool in Florida was built on the site. This freshwater pool is fed by a continuous flowing artesian well. The lodge became an entertainment center for many socially prominent New England and Chicago families as well as royalty and dignitaries from all over the world.

Henry Cutting died in 1892 and his widow, Angela, returned to New York shortly after his death. There she met and married an exiled Russian Prince, Boris Sherbatoff. The royal” couple chose to live at Cherokee Grove which again became the focal point for entertainment for socially prominent visitors from Europe and the Eastern United States. Thus, Cherokee Grove became Princess Place.

In 1954, Princess Angela Sherbatoff sold the lodge and surrounding acreage to Lewis and Angela Wadsworth who maintained the estate as a retreat. In 1973, the Wadsworths built a permanent caretaker’s home on the property and in 1976, they built an estate home to the south of the lodge on a natural island surrounded by salt marsh and creeks. Upon Lewis Wadsworth’s death, the estate promoted the property for acquisition by the State. This effort was supported by the County and was the catalyst for the
voter referendum in 1988 to enact the current Flagler County land acquisition program. However, the acquisition efforts failed. The property, instead, was purchased by Conway and Polly Kittredge from the estate. The Kinredges continued negotiations with the County for public acquisition.

In October 1993, the Board of County Commissioners of Flagler County purchased 435 acres of the property by using its land acquisition funds and approximately $1 million in funding from the State of Florida through one of the first Preservation 2000 Grants. Governor Lawton Chiles formally dedicated the Princess Place Preserve in August 1994. An additional 1000 acres are being added to the Preserve by Flagler County with the help of funding from the State and from the St. Johns River Water Management District. Also, the County has won an architectural preservation grant which will allow the property to be surveyed, rehabilitated and added to the National Register of Historic Places.

Aside from its historical significance, the Princess Place Preserve is located at the confluence of Pellicer Creek and the Matanzas River and is home to diverse ecosystems that contain the unlimited potential for passive public recreation, education, and conservation. The site contains saltwater marshes, freshwater wetlands, mature oak hammocks, and pine communities, scrub habitat and open surface waters. It is the goal of Flagler County to combine passive outdoor activities with an educational and historic appreciation of the preserve’s natural and man·made features.

The Princess Place Preserve is the cornerstone behind the nomination of the Matanzas River as the 23rd National Estuarine Research Reserve of the United States. This designation will not only bring valuable scientific research to enhance our marine estuary and increase the productivity of our fisheries, but it will continue to attract visitors who enjoy our recreational and conservation assets.

Flowing into the Matanzas River between the Princess Place Preserve and Faver Dykes State Park is Pellicer Creek which is a water body of significant environmental and recreational interest. Pellicer Creek Aquatic Preserve consists of 505 acres of sovereign submerged lands. The boundary of the preserve includes all tidal lands and islands, sandbars, shallow banks, submerged bottoms and lands waterward of the mean high water line to which the State of Florida holds the title. Pellicer Creek also is designated an Outstanding Florida Water as well as a State Canoe Trail.

The Princess Place Preserve is an important part of Flagler County’s award·winning Coastal Greenway which extends from the Pellicer Creek Aquatic Preserve on the north to Bulow Creek and the Tomoka Marsh Aquatic Preserve on the south. Flagler County, along with other governmental agencies, shares in the responsibility to protect its natural resources. The need to preserve and enhance valuable natural open space is, in part, a response to the rapid increase in the County’s population and to give our citizens a link to the County’s resources, its history and ecology, and its sense of community for the future.

The Princess Place Preserve is a natural resource conservation area, open to the public, and was a joint purchase with funding from Preservation 2000 Florida Communities Trust and Flagler County. The Princess Place Preserve is in various stages of accessibility and the County is working to improve access to the facilities. Should you need information on accessibility to enable your full participation, please contact the Flagler County Parks Department.

Is Flagler where you want to live 20 years from now? We are about to lose our heritage and sense of place.
END_OF_DOCUMENT_TOKEN_TO_BE_REPLACED
01 Apr

It’s finally here! In celebration of the latest census release, here are some facts about the United States 1950 Census and why it’s important! Saturday, April 1 was the “official census day” in 1950. The U.S. Census is required by…
END_OF_DOCUMENT_TOKEN_TO_BE_REPLACED
30 Mar