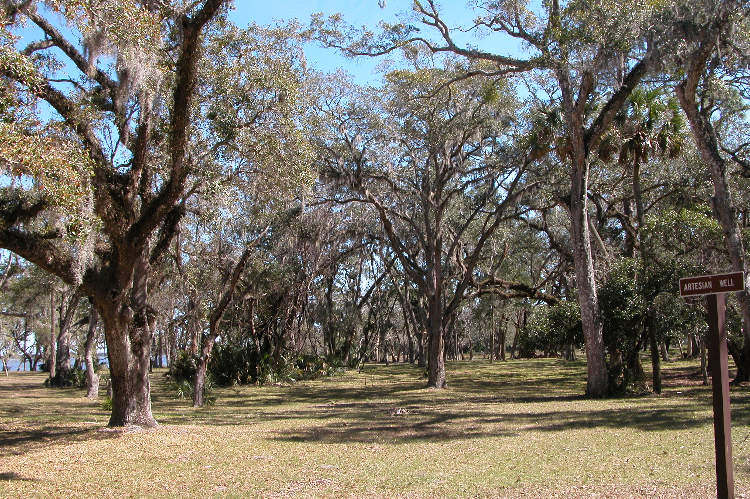 Famous naturalist James Audubon and friends, visited this area in 1831 and wrote about the Live Oak Cutters—here is part of his report which describes our Flagler County area.

(famous naturalist James Audubon and friends, visited this area in 1831 and wrote about the Live Oak Cutters—here is part of his report which describes our Flagler County area)

“The greater part of the forests of East Florida principally consists of what in that country are called ‘Pine Barrens.’  In these districts, the woods are rather thin, and the only trees that are seen in them are tall pines of rather indifferent quality, beneath which is a growth of rank grass, here and there mixed with low bushes and sword palmettos. The soil is of an [sic] sandy nature, mostly flat, and consequently either covered with water during the rainy season, or parched in the summer and autumn, although you meet at times with ponds of stagnant water, where the cattle, which are abundant, allay their thirst, and around which resort the various kinds of game found in these wilds.”

“The traveler who has pursued his course for many miles over the barrens, is suddenly delighted to see in the distance the appearance of a dark ‘hummock’ of live oaks and other trees, seeming as if they had been planted in the wilderness. As he approaches, the air feels cooler and more salubrious, the song of numerous birds delights his ear, the herbage assumes a more luxuriant appearance, the flowers become larger and brighter, and a grateful fragrance is diffused around. These objects contribute to refresh his mind, as much as the sight of the waters of some clear spring, gliding among the undergrowth, seems already to allay his thirst. Over head festoons of innumerable vines, jessamines, and bignonias, link each tree with those around it, their slender stems being interlaced as if in mutual affection. No sooner, in the shade of these beautiful woods, has the traveler finished his mid-day repast, than he perceives small parties of men lightly accoutred, and each bearing an axe, approaching towards his resting place. They exchange the usual civilities, and immediately commence their labours, for they too have just finished their meal.”

“I think I see them proceeding to their work. Here two have stationed themselves on the opposite sides of the trunk of a noble and venerable live-oak. Their keen-edged and well-tempered axes seem to make no impression on it, so small are the chips that drop at each blow around the mossy and wide-spreading roots. There, one is ascending the stem of another, of which, in its fall, the arms have stuck among the tangled tops of the neighbouring trees. See how cautiously he proceeds, barefooted, and with a handkerchief round his head. Now he has climbed to the height of about forty feet from the ground; he stops, and squaring himself with the trunk on which he so boldly stands, he wields with sinewy arms his trusty blade, with repeated blows of which, although the tree be as tough as it is large, will soon sever it in two. He has changed sides, and his back is turned to you. The trunk now remains connected by only a thin strip of wood. He places his feet on the part which is lodged, and shakes it with all his might. Now swings the huge log under his leaps, now it suddenly gives way, and as it strikes upon the ground its echoes are repeated through the hummock, and every wild turkey within hearing utters his gobble of recognition. The wood-cutter, however, remains collected and composed; but the next moment, he throws his axe to the ground, and, assisted by the nearest grape-vine, slides down and reaches the earth in an instant.”

“Several men approach and examine the prostrate trunk. They cut at both its extremities, and sound the whole of its bark, to enable them to judge if the tree has been attacked by the white-rot. If such has unfortunately been the case, there, for a century or more, this huge log will remain until it gradually crumbles; but if not, and if it is free of injury or “wind-shakes,” while there is no appearance of the sap having already ascended, and its pores are altogether sound, they proceed to take its measurement. Its shape ascertained, and the timber that is fit for use laid out by the aid of models, which, like fragments of the skeleton of a ship, shew the forms and sizes required, and the hewers commence their labours. Thus, reader, perhaps every known hummock in the Floridas is annually attacked, and so often does it happen that the white-rot or some other disease has deteriorated the quality of the timber, that the woods may be seen strewn with trunks that have been found worthless, so that every year the valuable oaks are becoming scarcer. The destruction of the young trees of their species caused by the fall of the great trunks is of course immense, and as there are no artificial plantations of these trees in our country, before long a good sized live-oak will be so valuable that its owner will exact an enormous price for it, even while it yet stands in the wood. In my opinion, formed on personal observation, live-oak hummocks are not quite so plentiful as they are represented to be, and of this I will give you one illustration.”

“On the 25th of February, 1832, I happened to be far up the St. John’s River, in East Florida, in the company of a person employed by our government in protecting the live-oaks of that section of the country, and who received a good salary for his trouble. While we were proceeding along one of the banks of that most singular stream, my companion pointed out some large hummocks of dark-leaved trees on the opposite side, which he said were entirely formed of live-oaks. I thought differently, and as our controversy on the subject became a little warm, I proposed that our men should row us to the place, where we might examine the leaves and timber, and so decide the point. We soon landed, but after inspecting the woods, not a single tree of the species did we find, although there were thousands of large “swamp-oaks.” My companion acknowledged his mistake, and I continued to search for birds.”

“One dark evening as I was seated on the banks of the same river, considering what arrangements I should make for the night, as it began to rain in torrents, a man who happened to see me, came up and invited me to go to his cabin, which he said was not far off. I accepted his kind offer, and followed him to his humble dwelling. There I found his wife, several children, and a number of men, who, as my host told me, were, like himself, Live-Oakers. Supper was placed on a large table, and on being desired to join the party, I willingly assented, doing my best to diminish the contents of the tin pans and dishes set before the company by the active and agreeable house-wife. We then talked of the country, its climate and productions, until a late hour, when we laid ourselves down on bears’ skins, and reposed till day-break.”

“I longed to accompany these hardy wood-cutters to the hummock where they were engaged in preparing live-oak timber for a man-of-war. Provided with axes and guns, we left the house to the care of the wife and children, and proceeded for several miles through a pine-barren, such as I have attempted to describe. One fine wild turkey was shot, and when we arrived at the shantee put up near the hummock, we found another party of wood-cutters waiting our arrival, before eating their breakfast, already prepared by a Negro man, to whom the turkey was consigned to be roasted for part of that day’s dinner.”

“Our repast was an excellent one, and vied with a Kentucky breakfast: beef, fish, potatoes, and other vegetables, were served up, with coffee in tin cups, and plenty of biscuit. Every man seemed hungry and happy, and the conversation assumed the most humorous character. The sun now rose above the trees, and all, excepting the cook, proceeded to the hummock, on which I had been gazing with great delight, as it promised rare sport. My host, I found, was the chief of the party; and although he also had an axe, he made no other use of it than for stripping here and there pieces of bark from certain trees which he considered of doubtful soundness. He was not only well versed in his profession, but generally intelligent, and from him I received the following account, which I noted at the time.”

“The men who are employed in cutting the live-oak, after having discovered a good hummock, build shanties of small logs, to retire to at night, and feed in by day. Their provisions consist of beef, pork, potatoes, biscuits, flour, rice, and fish, together with excellent whisky. They are mostly hale, strong, and active men, from the eastern parts of the Union, and receive excellent wages, according to their different abilities. Their labours are only of a few months’ duration. Such hummocks as are found near navigable streams are first chosen, and when it is absolutely necessary, the timber is sometimes hauled five or six miles to the nearest water-course, where, although it sinks, it can, with comparative ease, be shipped to its destination. The best time for cutting the live-oak is considered to be from the first of December to the beginning of March, or while the sap is completely down. When the sap is flowing, the tree is “bloom,” and more apt to be “shaken.” The white-rot, which occurs so frequently in the live-oak, and is perceptible only by the best judges, consists of round spots, about an inch and a half in diameter, on the outside of the bark, through which, at that spot, a hard stick may be driven several inches, and generally follows the heart up or down the trunk of the tree. So deceptive are these spots and trees to persons unacquainted with this defect, that thousands of trees are cut and afterwards abandoned. The great number of trees of this sort strewn in the woods would tend to make a stranger believe that there is much more good oak in the country than there really is; and perhaps, in reality, not more than one fourth of the quantity usually reported, is to be procured.”

“The Live-Oakers generally revisit their distant homes in the Middle and Eastern Districts, where they spend the summer, returning to the Floridas at the approach of winter. Some, however, who have gone there with their families, remain for years in succession; although they suffer much from the climate, by which their once good constitutions are often greatly impaired. This was the case with the individual above-mentioned, from whom I subsequently received much friendly assistance in my pursuits.” – – John James Audubon.

The Flagler County Historical Society is creating a fundraiser to obtain a Sea Turtle to be placed in front of the Holden House Museum as a new member of the Turtle Trail. The theme will consist of a combination of…
END_OF_DOCUMENT_TOKEN_TO_BE_REPLACED
18 Nov