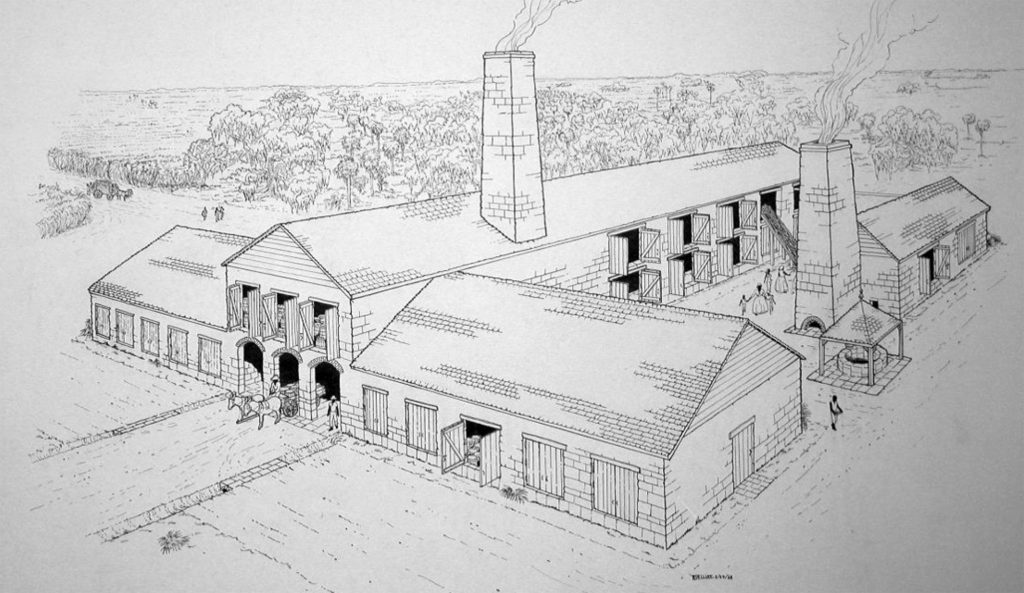 Once this plantation was one of the largest and most successful sugar producers in Florida.

from Bulow Gold by William Ryan 2012

Driving south on Old Kings Road from Palm Coast Parkway and the busy commercial area of Palm Coast you will encounter a sign for “Bulow Plantation.”  The entry road running to the east much resembles the written accounts of the Old Kings highway described as 16 feet wide and topped with crushed white shell.  Once this plantation was one of the largest and most successful sugar producers in Florida.  It was destroyed by the Seminole Indians in the bitter war that began in December of 1835. While primarily only the ruins of the great mill and a few other items are left, the site is a beautiful glimpse of “Old Florida.”   It has extensive hiking trails and is a popular site for fishing and canoeing. While the plantation existed from 1821 to 1836 in the Bulow family, it’s short 15-year history is very rich and worthy of knowing.

28 July 1812 Russell is given a Spanish grant of some 4,675 acres in exchange for his ship which was needed by the Spanish authorities to import food.  Spanish named the ship “Barbarita.”  Russell calls his new location “Good Retreat.” Russell believed his ship was worth at least $5,000 more than the value of the land the Spanish offered.  Much disagreement and negotiations as to obtaining the final land title.  Spanish said property needed to be occupied for 10 years before the final title passes.  War of 1812 prevents Russell from bringing all his slaves and assets from The Bahaman Islands.

1814 Russell dies in his daughter’s home in Fernandina.  Family legend said he may have been jailed by Spanish as an “English Spy.”  No firm records of the reason for his death.

1815 Francisco Pedro Pellicer was a witness of transfer of property to son James Hunter Russell who was born in the Bahamas in 1796. (age 25)  Rode about breaking branches, throwing up sand and other physical actions to show ownership under Spanish rule.  Lawyer Hernandez had been given power of attorney for Mary Russell, wife of John Russell deceased.

6 April 1821 Charles Wilhelm Bulow, who is the younger son of Joachim Bulow of Charleston S.C., purchases a townhouse in St. Augustine.  It is located at Marine Street bounded on the north by a lot of the heirs of Antonio Benten, on the west by the house of Marin Hernandez (Gen. and attorney Hernandez’ father) and south by a second house and lot of Martin Hernandez.  As a younger son of the very wealthy Bulow family of Charleston, Charles Wilhelm could not inherit.  He wished to establish works all his own and knew that in 1819 Spain had lost Florida to the United States.  The Spanish soldiers and residents of St. Augustine were departing in July of 1821.  He had purchased the house from a Spanish widow who was departing.  This townhouse would be his headquarters for the building of his plantation once he obtained clear title to some land.

July 1821 Group of desperate and starving Seminole Indians arrive in St. Augustine seeking Spanish aid.  They had fled from the community of Angola on the West Coast which was raided by followers of Andrew Jackson.  The Americans were now raiding Florida for as many free blacks as they could find, or what they called run-away slaves regardless that their families may have lived in Florida for several hundred years.  Despair by local Indians at the departure of Spanish.  Andrew Jackson was appointed as governor of the new territory of Florida.

August 1821 Bulow obtains the title of some 4,675 acres of Russell land for $9,944.50  He had obtained some additional land in the area from John Addison making his ownership a total of some 9,000 acres said to be the largest holding in Florida.  We do not have information on the building of his plantation but it is assumed that slaves were sent (as many as 300) from his older brother’s holdings in Charleston.  One large plantation there was called “Savannah.”  There would be an immense task of clearing land, cutting trees, and building necessary outbuildings.  Slaves could be brought by ship to Mosquito Lagoon to the south, and brought by boat north on connecting Smith Creek  to the Bulow property via boat from a location on the Lagoon called “Live Oak Landing.”  One account said that in 1822 Bulow had some 159 slaves with 800 acres in active growth.

1 May 1823 Charles W. Bulow dies in his new townhouse on Marine Street. He is buried in Huguenot Cemetery St. Augustine. Since Charles W. died in May, the period from August 1821 to May 1823 probably did not present much time for extensive crops, or the finishing of a plantation house on the Bulow property.  No information could be located in this short time period.  There was much Yellow Fever in the area at this time.  Bulow had a daughter called Emily who was listed in some accounts as “adopted.”  (You must read Bulow Gold for this story.)  Bulow’s wife, Abigail (Adelaide) Bulow moved to New York City from Charleston upon his death to live with Emily who was then married.

September? 1823 Charles W. Bulow’s son John Joachim Bulow arrives from Paris.  He was born in 1807 and was sent to Paris for his education possibly at 5 years old in 1812.  The world was at war.  He was underage on his return possibly 16 years. Francisco Pellicer (sr) was appointed as his guardian and his son Francisco Pedro Pellicer (Francis) was appointed as a plantation manager.  The Pellicer family had holdings along what would be called Pellicer Creek (Princess Place Preserve today) and also a large Spanish grant immediately to the north of the Bulow lands.

1823 – 1831 We do not know exactly when everything was built.  In 1828 young James Emanuel Ormond III lived on the Bulow plantation and later wrote a brief account.  He said there were some 300 to 400 slaves, a big library full of fiction books, a wonderful 8 oar fishing boat large enough for guns, nets, tents, and cooks.  The 2 1/2 story plantation house 62′ x 42′ had two separate kitchens, there were 46 well build slave houses located in a semi-circle around the house, a sawmill, corn house, huge sugar works with the steam engine, cotton gins, poultry houses, cooperate, blacksmith shop, fodder storage.  A few of these buildings have been located.  Crops were Molasses, corn, sweet potatoes for the slaves,  cotton, Indigo for dye, and large rice fields located across Smith Creek to the east.  A roadway and bridge were built from the plantation, across the creek and leading to the ocean on the east.  Also, several extensive coquina quarries were used to cut valuable building material.

James Ormond III wrote of the good relationship and visits young Bulow had with the Seminole Indians including young Wild Cat (Coacoochee), his father King Philip, Billy Bowlegs all who came to trade in wild turkey, venison, wild hogs, and Contie flour. They desired trade cloth, Spanish silver dollars (for jewelry), rum and whiskey.  He said young Bulow had some wild ways from his French education and loved to party, entertain, hunt and fish.  Later Plantation Manager Pellicer wrote that the works had a good profit of in excess of $20,000 yearly which was large for the times.  (other competitive planters were struggling due to a low price for sugar and lacking the extensive labor resources available to Bulow.)

For a description of sugar production at Bulow and other plantations of the period consult:

Sweet Cane The Architecture of the Sugar Works of East Florida by Lucy B. Wayne
University of Alabama Press 2010

December 1831 Probably on Christmas day, the naturalist John James Audubon walked to Bulowville from the MalaCompra plantation of Gen. Hernandez where he had been visiting.  Since Audubon was brought up in Hispaniola (Haiti) both he and John Joachim Bulow spoke perfect French.  They did a hunting, bird trip in January which was written about by Audubon in good detail.

December 28, 1835, Militia under Maj. B. A. Putnam called themselves “Mosquito Roarers” arrived at Bulow Plantation from Rosetta plantation to the south.  They had moved to Bulow Plantation along with many refugees from plantations that were being attacked and burned by the Seminoles who were now at war.  Bulow resisted their occupation and fired a small cannon (most likely with powder only) as they came upon his property.  His objection was that if his property was fortified, it most certainly would be attacked and destroyed.  His resistance resulted in his being locked up and “enlisted” into the Militia under army authority.  He was locked up and forbidden to eat at his own table.

The plantation was fortified with a log fort constructed in front of the Plantation House, a well dug for the fort, and barricades set up using Bulow’s bails of cotton.

The Mosquito Roarers went south on Smith Creek using Bulow’s boats to raid the Indians at Dunlawton Plantation to the south.  According to Mr. Ormond III’s account (he was present) the somewhat undisciplined Militia soldiers had a disaster and returned to Bulow with many severely wounded and sick.

January 23 1836 Bulowville was abandoned in a midnight trip traveling north on Old Kings Road to the then doubtful safety of the Hernandez St. Joseph’s Plantation approximately 10 miles to the north. Bulow had to walk behind his own Ox carts and wagons taking the wounded, sick soldiers north.  He was not permitted to remove any of his valuables.

January 31, 1836 Bulowville was burned and destroyed.

Many contemporary authors had young Bulow returning to Paris and dying there.
On April 1, 1836, he appeared before a Justice of the Peacemaking a statement of losses due to the army occupation.  Sworn statements of many from the Mosquito Roarer group were taken in support. On May 11 (Wednesday) a statement appeared in the Florida Herald of Charleston saying that Bulow had died in St. Augustine on May 7th.  Further, researcher James Fiske of the Flagler County Historical group, found a copy of the burial notice in St. Augustine saying Bulow was buried on Sunday, May 7, 1836, and officiated by Reverend Parker of Trinity Parish.  The location of the burial was unfortunately not given.

FCHS plans for 2022. Thinking of our history in a new way. Strategic plan for history tourism. Recognizing our history assets.
END_OF_DOCUMENT_TOKEN_TO_BE_REPLACED
28 Dec

November 2021 - Thanksgiving at the Holden House. Foods and recipes from the past.
END_OF_DOCUMENT_TOKEN_TO_BE_REPLACED
01 Oct

Ode to Bunnell, our 'MacGyver',Songs of Bunnell, Work Days are coming!
END_OF_DOCUMENT_TOKEN_TO_BE_REPLACED
20 Sep

Historical Events and People in August to September 2021
END_OF_DOCUMENT_TOKEN_TO_BE_REPLACED