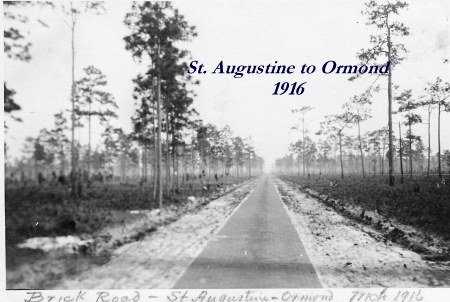 In January 2006 The Stanley Steamer association took their Steam Car Tour on The Dixie Highway or our Old Brick Road.

For the adventure-hungry, a prescription: find a four-wheel-­drive vehicle with decent ground clearance, drive it to Espanola, and hang a right at the stop sign. Hold on.

A quarter-mile after the sign the pavement ends, but not in dirt. Bricks red as the setting sun extend in bowed columns to the horizon. White-tails and armadillos skitter across the road’s corridor and cut through a mass of palmettos and slash pine.

Bump a mile or two up the Old Brick Road, then stop. Cut off your engine and get out of the truck. Look left-nothing but a knobby road to nowhere. Look right-more of the same. No Disney World, no Wal-Mart, no Steak ‘n’ Shake. Believe it or not, you’re still in Florida.

Nine miles long and a scant nine feet wide, the Old Brick Road is a slowly decaying monument to a slowly decaying way of life. What remains of the road is only a short section of the original. In 1915 St. Johns County (of which most of Flagler County was a part) began con­struction of the Dixie Highway, which would connect Jacksonville with the area around Flagler Beach. The highway was part of a larger system which connected Chicago to Miami. Its name is retained in Old Dixie Highway south of Bunnell.
It’s likely you’ve never heard of many of the towns the road passed through. Byrd. Spuds. Hurds. Dupont. It’s a laundry list of scrub-hollows and swamp-bottoms made towns when the Florida East Coast Railroad was cut through the area in the late 1800’s. Timber, turpentine, and potatoes were trucked to these stations and shipped to points north. Dixie Highway paralleled the tracks for much of the way.

Dupont is now a ragged corner store. Spuds is little more than a sign. As highways replaced railroads as the pre­ferred method of transporting cargo, the Florida East Coast’s towns declined. Dixie Highway sank in disrepair.

Most of the highway was ripped apart and paved over in the 20’s and 30’s. It was during this time that Moody Boulevard, which connects Bunnell and Flagler Beach, was constructed over the old road. Jack Clegg, who has lived in Flagler County since his father brought him here in 1913, remembers when the boulevard was built. “They gave away the bricks,” he said, “to anyone that could afford to haul them away.” The bricks taken from the old road were used to build a number of structures in Bunnell, including the gymnasium at Bunnell Elementary School (which was then a high school as well), Clegg took a pile of the bricks himself and used them to build a fireplace and patio in his home.

Clegg also remembers riding on the brick road before it was demolished. “We would drive from [Bunnell] to the beach,” he said, “and not pass one car on the way.” At nine feet wide, the road could accommodate only one Model T-sized-vehicle at a time; passing cars had to pull off to let one another by. Lew Wadsworth, who has lived in the county nearly all of his life, remembers riding in the back of his father’s car up the brick road. He said that though driving on its bricks was better than driving on a dirt road, “it wasn’t something you called fast.”

In those days, the Dixie Highway was nicknamed “Tin Can, Alley” after the groups of tourists that trucked down the road pulling “tin cans” – trailers made of cheap metal. Newspapers from the period reported that from 100 to 150 carloads of these sightseers flied along the brick road every day. Accommodations for the tourists sprang up in towns along the road. Espanola was one of the most popular stops with a hotel, restaurant, room­ing house, barber shop, and post office. All of these collapsed, however, when a highway connecting St. Augustine and Bunnell was completed in 1926.

A few miles north of Espanola on the part of the road still surviving are the remnants of what was another traveler’s haven – Flagler City. Planners of the town had grand visions for it; a grid of sidewalks were carved into the brush and a gas station erected. Nothing more was built. The highway boom killed the planners’ visions; mud swallowed the sidewalks.

When you reach the end of the Old Brick Road you’ll hit County Road 204, which will take you to Interstate 95. You can speed back on this if you want; a Waffle House and Stuckey’s will provide the road­side scenery. Or you can spin around and see Tin Can Alley as newly-arrived snowbirds would have, pushing south into the palms.

Sadly, the Old Brick Road is suffering a similar fate. Gaps in its surface show where bricks have been stolen for souvenirs or building materials.

The Old King’s Road before the American Revolution and the Dixie Highway (Brick Road) of the 1914 era. Comments on our historic roads by History Tour Guide Bill Ryan. Video interview on Flagler Historic Roads. On April 20, 2005, the Dixie Highway – Hastings, Espanola, and Bunnell Road was listed on the National Register of Historic Places. (5000311) It is the few remaining, relatively intact, and drivable sections of the 1914 era roadway into Florida.

Is Flagler where you want to live 20 years from now? We are about to lose our heritage and sense of place.
END_OF_DOCUMENT_TOKEN_TO_BE_REPLACED
01 Apr

It’s finally here! In celebration of the latest census release, here are some facts about the United States 1950 Census and why it’s important! Saturday, April 1 was the “official census day” in 1950. The U.S. Census is required by…
END_OF_DOCUMENT_TOKEN_TO_BE_REPLACED
30 Mar