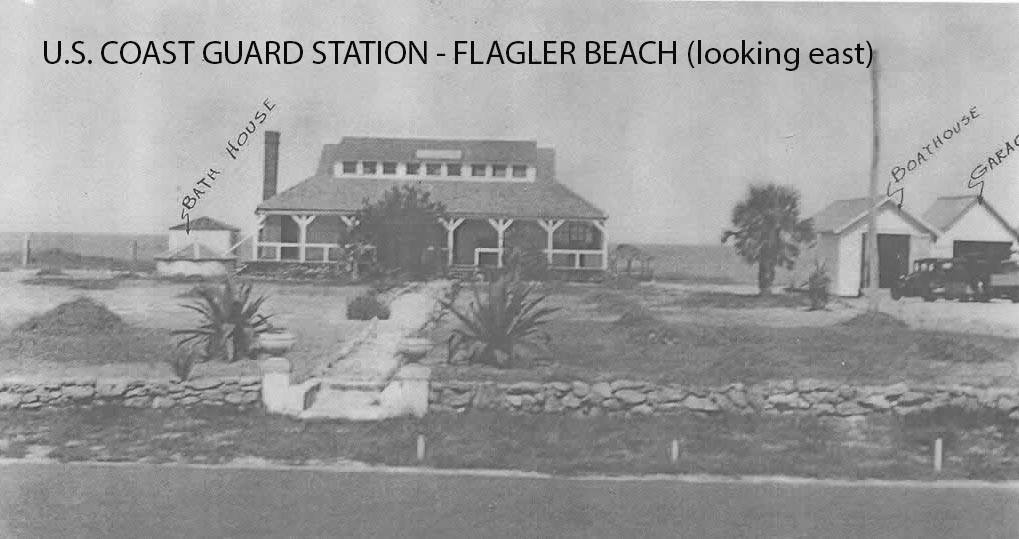 A neat white building, keeping vigil over a lonely strip of Florida’s East Coast dunes, Flagler Beach Coast Guard station, on the Ocean Shore Blvd., south of Flagler Beach, is known to thousands of visitors from every compass point.

“Another never-solved mystery concerns an unknown British 2-masted auxiliary schooner, loaded with choice liquors and wrecked in 1925 8 miles north of Flagler Beach. The only survivor, so far as it is known, was the negro skipper, who died soon after reaching the beach. He refused to identify either himself of his vessel, and was buried in a nameless grave west of the Flagler Beach Coast Guard Station.

In the northwest corner of the station yard is a small, crudely-marked grave where yellow fever victims are buried. Children of the first station commander, they succumbed to the disease during the epidemic of 1887.” – Sisco Deen notes.

A neat white building, keeping vigil over a lonely strip of Florida’s East Coast dunes, Flagler Beach Coast Guard station, on the Ocean Shore Blvd., south of Flagler Beach, is known to thousands of visitors from every compass point.

Only one of 6 stations in the state located on a highway, as well as most northern shore stations on the Florida East Coast, Flagler Beach Coast Guard Station also holds the distinction of saving more property in 1933 than any other station in the United States. The record was made with a one-man crew; Chief Boatswain’s Mate Clarence Toler, office in charge, acting as surfman, Number One Man, and Captain.

Established in July 1869, as Halifax Beach Coast Guard Station, the crew rowed down the Bulow Canal to Ormond for mail. Later, the place was renamed Bulow Station with mail coming to the Bulow post office on the west bank of the canal. In 1929 the Station was again renamed as it is known today and the post office address is the town of Flagler Beach, 3 miles north. The station was closed in 1919 but reopened in 1924.

In 1928 the crew was increased to 9 men for 5 months, then it became a one-man station until Sept. of 1935 when a surfman arrived as an assistant for Capt. Toler. Together, they kept daily records of passing planes and boats, weather reports, and assistance rendered. Equipment, including a 19-ft. surf boat, a beach cart, and a 1 ½-ton truck must be always in prime condition.

Although there are no watches, bad weather means a daily 60-mile patrol from St. Augustine Inlet on the north, to Ponce de Leon Inlet south. Mosquito Lagoon, 50 miles south, is the nearest Coast Guard neighbor, while 345 miles north is the Sullivan’s Island, S. C. Station.

Much of the Flagler Beach district includes a world-famous stretch beach, at low tide ideal for motoring. Aeroplanes use it as an emergency landing field, and in calm weather, small boats navigate close along the shallow, surf-edged shore.

From such activity, the Flagler Beach Coast Guard Station gathers sometimes over 100 “assistance rendered” reports in one year. Motorists out of gas, stuck in the sand, or caught by the tide; aeroplanes with engine trouble, or forced down by adverse flying conditions; small boats in distress for any number of reasons.

In a personal scrapbook, Capt. Toler has collected newspaper clippings, letters, and pictures relating to station activities. Among them are any letters of commendation for courteous service; several are from Read Admiral F. C. Billard, USN, a personal friend; Maj. Gen. B. D. Fulois, of the Army Air Corps; and Maj. G. R. Cook, of the War Dept. in Washington. Especially treasured, is an autographed photograph of Col. Charles A. Lindberg, forced down in his plane en route from Miami to New York on Flagler Beach Nov. 28, 1933. For 3 days Capt. Toler was friend and host to the famous flyer at the Flagler Beach Coast Station. Besieged by sightseeing mobs on Lindberg’s trail, Capt. Toler nailed down the Station windows to keep would-be intruders from forcing their way into the building.

Later in the winter of 1932, Capt. Toler acted as shore convoy to President Hoover making a visit along Florida waterways in the government vessel “Sequoia”.

There are 4 gold stripes on Capt. Toler’s right sleeve and on May 9th he will add another. Each stripe means 4 years in the Coast Guard service. He was still in his teens when he enlisted. His service includes time on the cutters “Yamacraw” and “Pamlico”, 90 days as a drillmaster in New York, and he as been cook as well as surfman at shore stations in Long Island and the Carolinas. In 1926 he was transferred to Flagler Beach from his home station at Currituck Beach, N.C. Since coming to Flagler Beach, Capt. Toler has served as a mechanic, doctor, and all-around neighbor to residents as well as visitors from every state in the union. He has also added aviation to his experience as a reward for aiding a private plane in trouble on the beach. A free 450 flying course gave him 26 hours in the air.

Capt. Toler has been interested in aviation since he was a ten-year-old boy, watching the Wright brothers take off from Kitty Hawk in their first flight. He is one of 3 living persons to witness the event and is annually invited to be honored guest at the Wright Memorial Association celebration.

There was the wreck of the big 4-masted schooner “Tamaroo” of Tampa, 10 days out Jacksonville with lumber for South America. Caught is a northeast gale, with a shifted cargo and clogged pumps, she struck the beach a mile south of Flagler Beach Coast Guard Station on Oct. 18, 1929. Her crew of 9 negroes and a white supercargo came ashore safely on bits of wreckage. Only 1 seaman was lost. When the blow was over, a salvage crew of 5 m3n was out aboard the schooner by the Putnam Lumber Company, Jacksonville cargo owners. On the 5th day, the sea roughened up and Capt. Toler assisted by a Volunteer Life Saving crew from Daytona Beach, took the men off in a breeches buoy. Soon after the rescue, the schooner was scattered along the beach where some of the wreckage may still be seen.

In Oct. of 1927, a little shrimp boat struck near the station. Heavy surf, with a strong northeast gale, made the line, gun and surf boat useless. With a light line around his waist and the end paid out by a short assistant, Toler swam out 3 times to the boat, bringing in a negro seaman ashore with each trip.

At another time, 5 shrimp boats were blown ashore near the station in less than an hour. Only 2 of the little vessels were salvaged. No lives were lost, but it kept the one-man crew at Flagler Beach Coast Guard Station busy for several hours.

Rumrunners in the Flagler Beach vicinity found the vigilant one-man crew at Flagler Beach Coast Guard Station to be a dangerous enemy. Capt. Toler was alone when he made his big haul on the night of May 9, 1930. Bound for the Flagler Beach post office in his own small car a big sedan passed him speeding south. Toler caught a glimpse of liquor cases piled high in the back and took chase. Running the car off the highway, he arrested the lone occupant-driver, took him to the Coast Guard Station and commissioned Mrs. Toler guard with a 30-30 rifle. Certain there was a landing party operating somewhere nearby, Toler set out to locate it. On a palmetto scrub road 8 miles north of Flagler Beach, he found what he was looking for. Blocking the road with his own car, Toler was fender to fender with the run runners. Challenged by a rum runner guard, Toler made known his identity. The guard answered by a volley of shots, and took to the palmetto scrub, with Toler firing in return. Apparently alarmed by the shooting, and not knowing the raiding party’s strength remaining, the rum runners likewise too flight, leaving Toler alone with 3 cars and a sea skiff on the beach, in addition to 280 sacks of liquor. While he was taking the rotators out of the car distributors to make sure they could not be used in event of the rum runner’s return, Toler heard a low whistle from the palmettos. By answering with the same whistle and firing a few shots, Toler captured two unsuspecting negroes, member of the crew. Loading the two captives into his own car, Toler then drove to Flagler Beach for assistance in moving the night’s haul to the Coast Guard Station. Because the lad was too big for the already crowded Customs House in St. Augustine, it was later taken to Jacksonville.

Quick action resulted in another liquor cargo capture for Toler on April 22. While out riding with his family, Toler observed a 40-ft white boat at anchor outside the breakers about a mile north of Ormond Beach. Apparently deserted, the craft roused Capt. Toler’s suspicions and after swimming out to her he found she was loaded with liquor. Without delay, Toler sent his wife for the deputy sheriff while he waited aboard the boat. A half-hour later a dozen rum runners appeared with gas and supplies, boarded the boat and advised Toler to take his choice of getting off or coming along. During the parley, Toler managed to cut the anchor line and the boat grounded on a lowering tide. With the arrival of the deputy sheriff, the men lost interest in their liquor-loaded craft, refused to claim it, and fled, before they could be arrested. Later the boat was floated and taken to the Fernandina Coast Guard base. No owner was ever located.

Another never-solved mystery concerns an unknown British 2-masted auxiliary schooner, loaded with choice liquors and wrecked in 1925 8 miles north of Flagler Beach. The only survivor, so far as it is known, was the negro skipper, who died soon after reaching the beach. He refused to identify either himself of his vessel and was buried in a nameless grave west of the Flagler Beach Coast Guard Station.

In the northwest corner of the station yard is a small, crudely-marked grave where yellow fever victims are buried. Children of the first station commander, they succumbed to the disease during the epidemic of 1887.

Capt. Toler welcomes station visitors from 2 to 4 daily and is always willing to explain the equipment and duties to those interested in Coast Guard work.

Transcribed from the Toler Scrapbook on file at the Flagler Beach Museum for the Flagler County Historical Society on January 5, 2016 by Sisco Deen.

The Flagler County Historical Society is creating a fundraiser to obtain a Sea Turtle to be placed in front of the Holden House Museum as a new member of the Turtle Trail. The theme will consist of a combination of…
END_OF_DOCUMENT_TOKEN_TO_BE_REPLACED
18 Nov