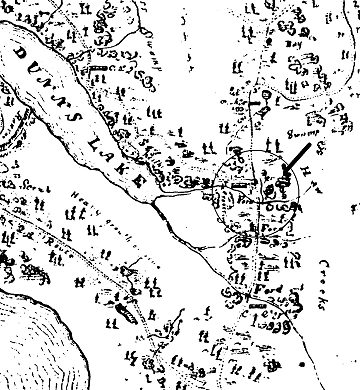 Haw Creek runs through an area of Flagler County that is rich in wildlife. It is a favorite area for boaters and fishermen.

Haw Creek runs through an area of Flagler County that is rich in wildlife.  It is a favorite area for boaters and fishermen.

Tucked away in western Flagler County lies Haw Creek Preserve, a 1,005-acre tract of land bordering Haw Creek for about two miles on its southern boundary. This area was set aside to preserve the cypress oak and hardwood swamp that borders Haw Creek. Many Haw trees line the creek and produce the small apple-like fruit from which the creek gets its name. The fruit is popular for making jelly.

It was once the camp of Halleck-Tustenugge, a Seminole Indian Chief who was noted as a looter and burner of early settlers’ homes and fires and was believed to have camped at the head of Dunn’s (Crescent) Lake in Haw Creek.  He was reportedly the head of a war party attacking the settlement of Mandarin, twenty miles south of Jacksonville, on the aster bank of the St. Johns.  The small village was raided while its men were away on a deer-hunt.  Houses and residents were attacked, killed or burned in a 10-mile radius.  Two men, a  woman, and an infant were reportedly killed.

The army long sought after the Seminole camp. They made seven months of search guided by friendly Indian scouts.  He reportedly had a group of thirty-five Miccosukee warriors who were noted as being the most determined not to surrender to the army.  It was also believed this was the routing of Osceola when he traveled north to meet with the army and be captured under a white Flag of truce. Careful scouting of Graham’s and Bulow’s swamp, the Tomoka River and the Spring Garden trail had failed to produce the elusive Indian.  On 25 January 1842, an infantry detachment located Halleck’s hidden camp at Haw Creek near Dunn’s Lake but the Indians escaped. One soldier was killed in the battle and two wounded.   They did locate many buried supplies including five buried kegs of powder, cloth, and other items.  However, the Tustennugee and his group had escaped.

Halleck was captured on April 19, 1842.  He later served as a scout in the Civil War fighting against pro-South Indian tribes.

The Three Fords of Haw Creek.  This 1739 soldier’s sketch map provides a clue as to where the Indian camp may have been.  It was located on the “Spring Garden Trail” which was a much-used route to the south.

Haw Creek area was popular with sportsmen for many years.  It is noted for its great beauty and still is untouched.

Haw Creek flows into the junction of the southeast corner of Crescent Lake and the south end of Dead Lake. This is a very beautiful area with abundant wildlife to be observed. The Crescent Lake Conservation Area and the Haw Creek Preserve provide over 4,500 acres of protected wetlands and forests around Haw Creek and they offer great opportunities for outdoor recreational activities. The nearby waters of Crescent Lake and Dead Lake are known throughout the southeastern United States as great places to fish for trophy size bass and speckled perch. Crescent Lake is also known for the large alligators taken there during alligator hunting season, some in the 12–13-foot range.

When the narrow gauge railroad was constructed through the Haw Creek section, two families were living in the area, the Walter Eugene Knight’s and the Nathan Roberts’. Mr. Knight was raising sheep and doing some farming. Mr. Roberts did some farming too, but he had a fair-sized orange grove and a large Scuppernong grape arbor.

With the many working people coming into the area, Utley James White built three houses in the area. Utley also put up telephone lines and all the homes had telephone service. All the bridge timbers for the Key West Extension of the Florida East Coast Railway were cut from the Haw Creek section and manufactured in the Utley J. White sawmill at Dupont. The Key West Extension was later the Over Seas Highway (now U.S. 1), when the railway was removed.

In 1907, Mr. White planted Irish potatoes for commercial purposes. When the Dupont Land Company took over in 1912, they built the Tippecanoe Inn at Dupont. It was under the management of Mr. and Mrs. Gomez Pacetti and offered splendid accommodations for that day and time.

The Dupont Land Company also changed the narrow gauge railroad to Haw Creek to standard gauge. This connected with the Florida East Coast Railroad at Dupont. The “Dummy”, as the train was called, made several trips a day to Haw Creek and the people living there at that time boasted of mail delivery twice a day.

Many people used hand cars to go back and forth to their work and to Dupont. The telephones were connected to the Bunnell Exchange with Billie Graham McIntosh as the telephone operator.

After the timber had been cut from this area, the people became interested in agriculture. Northern settlers began to come and build homes. During the harvesting season-long trains of carload, lots of produce on its way to market was a common sight.

The schoolhouse was built in 1918. It was used for church services on Sunday. Neva Brown Eisenbach was the first teacher and George Wickline was one of her pupils. The Wickline’s had moved from Dupont to the house on Section 25 and Mrs. Wickline had a rooming house there. Neva had a room there but rode back and forth on the “Dummy” much of the time for her family still lived at Dupont. Julia Ferguson Clegg was the second teacher. She lived with the Wickline’s until they moved to Flagler Beach.

Turpentine became a big business in Haw Creek. One of George W. Deen’s turpentine stills was located at Orange Hammock. My Grandfather James Emmett Deen operated this still for a time as did Major James Frank Lambert. There was also a turpentine still at Relay (about where the present fire tower is today on S.R. 11 just south of C.R. 304), operated by David Brown Paxton.

In the late 1800’s a stage coach ran from St. Augustine to Daytona Beach, and they changed horses at Relay – – hence the name.

Is Flagler where you want to live 20 years from now? We are about to lose our heritage and sense of place.
END_OF_DOCUMENT_TOKEN_TO_BE_REPLACED
01 Apr

It’s finally here! In celebration of the latest census release, here are some facts about the United States 1950 Census and why it’s important! Saturday, April 1 was the “official census day” in 1950. The U.S. Census is required by…
END_OF_DOCUMENT_TOKEN_TO_BE_REPLACED
30 Mar