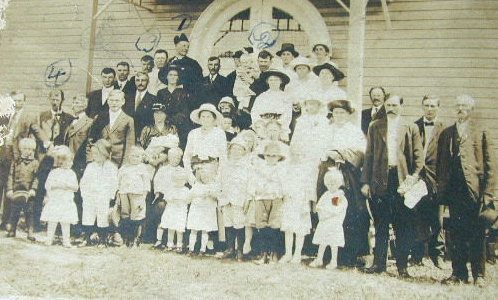 Polish immigrants in Chicago, Detroit, and other cities were the original settlers of this new town about six miles south of Bunnell.

Polish immigrants in Chicago, Detroit, and other cities were the original settlers of this new town about six miles south of Bunnell. They had been attracted to this area by the direct marketing efforts of the Bunnell Development Company whose advertisements to this audience were written in the Polish language. Some of the ads are on display at the Flagler County Historical Society Museum in Bunnell.

Before leaving for Florida a committee was formed and it raised $1,000 to build a church in Korona. God, Country, and Honor was their traditional motto. Their pioneering spirit and tremendous desire to find a new life in the south spurred them on.

The first 35 families arrived early in 1914. Among these were Stupecki, Waszewski, Strach, Trojanowski, Mazurewicz, Cyzycki and others. They began building their homes and a duplex home for their priest, Rev. Father Andrew Baczyk. Part of his home later became their first Post Office on 27 Apr 1918 and the highlight of the day was waiting for the Florida East Coast local to drop off the mail pouch.

Izydor Waszewski was awarded the contract to build the church and the first Mass was celebrated with all the pomp and ceremony they could arrange. Mary Frankowiak – – Miss Mary, as she is affectionately called – – played the organ and sang the Mass and decorated the Altar for many years. Miss Mary died in 1968 and is buried the St. Mary’s Church Cemetery in Korona.

Poor drainage, hordes of mosquitoes and no roads or farm tools forced some settlers to return to Chicago. Others stayed on to eke out a living. Slowly the dense vegetation disappeared; more homes began dotting the countryside. Potato and vegetable crops helped build the economy of Korona. In later years many of the residents went into the poultry raising business.

In 1926, a new landmark was added to Korona. It was called The White Eagle Hotel and was erected by the late Barney Trojanowski.

Barney Trojan, as he was later called, had quarters for his family and rooms for tourists on the upper floor. On the ground floor were a grocery, feed store, and a real estate office. Later the entire first floor was turned into a beer garden with a large dance floor.

Here, for many years, dances were held Wednesdays and Saturdays. Polish people from all over Florida gathered here to celebrate all the major holidays. Church suppers, club dances made this the gathering center of the area. This building was torn down in 1959 when U.S. Highway 1 was enlarged from two to four lanes. The present White Eagle Bar in Korona is very near to where the original White Eagle was located.

The St. Christopher’s Shrine next to the old church, was built when Rev. Fr. C. Hoffman became resident pastor. His personality and drive made friends for him all over this section of the state. The Shrine was his gift to Korona and to all motorists who would come and pray to the Patron Saint of travelers.

St. Mary’s Parish was attended spiritually by the Redemptory’s Priests from New Smyrna Beach until 1954. That year the parish was given to the Diocesan Priests of St. Augustine.

The Flagler County Historical Society is creating a fundraiser to obtain a Sea Turtle to be placed in front of the Holden House Museum as a new member of the Turtle Trail. The theme will consist of a combination of…
END_OF_DOCUMENT_TOKEN_TO_BE_REPLACED
18 Nov