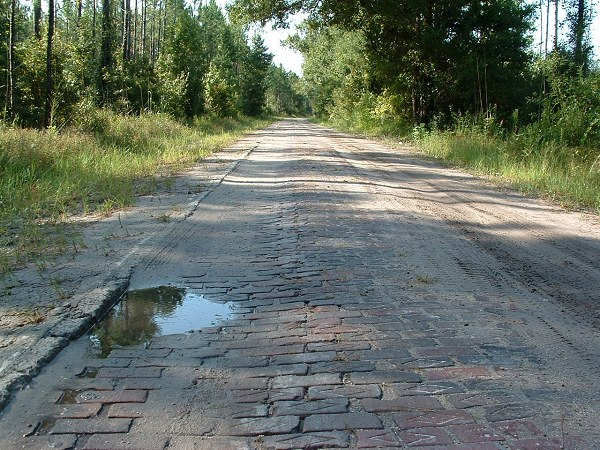 One of the proposed routes for a road connecting Hastings with the southern end of the county, and to form a link in the Miami-Montreal highway was inspected by Commission Moody, says the Hastings News.

THE DIXIE HIGHWAY (Old Brick Road) – This portion of the 5,706-mile long highway which stretched as far north as Ontario, Canada and as far south as Florida City, Florida is made up of bricks from two major companies; Southern Brick in Tennessee and Graves Brick in Alabama

One of the proposed routes for a road connecting Hastings with the southern end of the county, and to form a link in the Miami-Montreal highway was inspected by Commission Moody, says the Hastings News. With J. B. Johnson and J. L. Morrison, Mr. Moody drove from here to Espanola, a distance of about eighteen miles. Leaving Hastings by the “Diagonal,” or county road, to Cowpen branch, they went straight on to Gopher Ridge. The road has been worked for a greater part of the way and the expense of making necessary repairs with be slight. From Gopher Ridge the route followed led along the road bed of the English Company’s old tram road, across the Big Cypress to Elbow Ridge. The good work in tram building done by this old lumber company is still in evidence and could easily be made the basis of a modern highway.

The road follows along the Elbow Ridge striking the railroad at Espanola, a distance between eight and ten miles.

At Espanola convicts are at work upon the road leading south along the railroad to Bunnell and have already finished a considerable stretch of the road. Volusia county will meet the hard-surfaced road at whatever point it comes to the line and improvements are now being made at Harwood. If the St. Johns county road is extended down the railroad through Dupont to the line it can be made to connect with the Volusia road.

Though none of the citizens except two made the trip with Mr. Moody, a great deal of interest is manifested and a great many, all that we have talked to, have expressed themselves strongly in favor of the Elkton-Hastings-Bunnell route as the best and only way for the national highway to go. By adopting this route extensive tracts of wild land, as fertile as any in the county, but now almost inaccessible, will be made accessible to settlers. Using this route, the road will traverse the principle agricultural section of the county and those traveling over it would witness the results made possible by a wonderfully productive soil combined with most favorable climatic conditions.

Taking into consideration the number of miles of road that has been improved, the work of building is partly done and the rest will not be harder of accomplishment than on any other route.

HIGHWAYS – The Dixie Highway and U.S. 1

Early county developer Isaac I. Moody, Jr., was elected President of the Board of County Commissioners for St Johns County in 1912. Newspaper accounts show that in Apr 1913 he was in St Augustine with his wife to hear a speech by William Jennings Bryan. They then left for Washington, DC where they attended the Good Roads Convention.

In Apr 1914, Isaac was pleased to announce that St Johns County voters had approved a $650,000 Bond Issue for a new highway to be made of vitrified brick. Soon thereafter work in present-day Flagler County started from the Bunnell State Bank and preceded in two directions, one crew working east to Ocean City and one crew working north towards Espanola. The highway was to become a part of the Dixie Highway, a small network of interconnected paved roads, rather than a single highway that connected the Midwest with the southern United States. It was overseen by the Dixie Highway Association, and funded by a group of individuals, businesses, local, and state governments. The federal government played little role, but from the early 1920s on it provided increasing funding, until 1927 when the Dixie Highway Association was disbanded and the highway was taken over as part of the United States highway system with some portions becoming state roads.The Dixie Highway came south from St Augustine, through Hastings, through Espanola and then on to Bunnell. From Bunnell it went east to Ocean City and then south along the present John Anderson Highway to Volusia CO. Later an extension was added which whet from Bunnell to Korona and then SE to connect with the present John Anderson Highway.

The Dixie Highway, which we now call the old brick road, ceased to be a major roadway, when the New Dixie Highway, named by the State as State Road 4 (now U.S. 1), was opened on 01 Dec 1927 offering a direct route south from St. Augustine to Bunnell, to Korona and on south to Ormond.

The Flagler County Historical Society is creating a fundraiser to obtain a Sea Turtle to be placed in front of the Holden House Museum as a new member of the Turtle Trail. The theme will consist of a combination of…
END_OF_DOCUMENT_TOKEN_TO_BE_REPLACED
18 Nov