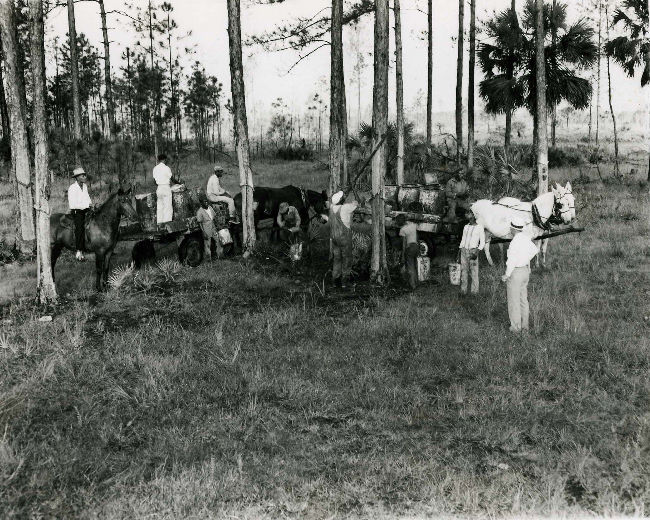 Turpentining in Flagler County Now Only a Memory

When Flagler County was officially created in 1917, it was built around agriculture. One of the biggest sources of in the county was the turpentine industry a natural choice since a great part of the county was covered by pine trees.

When Flagler County was officially created in 1917, it was built around agriculture. One of the biggest sources of in the county was the turpentine industry a natural choice since a great part of the county was covered by pine trees.

The industry had its stability in one form or another since colonial days when pine resin was harvest­ed and processed using crude methods in North Carolina.

By the mid-1800s, improvements in refining, as well as a larger demand, made the industry prosper and spread to other Southern states such as Georgia and Florida. In Flagler County, turpentine was big business until the latter part of the 1950s, when it slowly began to decline. Today, there is very little turpentining being done in this area of Florida, and none in Flagler County.

Originally the biggest market for pine sap derivatives was in shipbuilding and repair. The sticky substance made an excellent pitch for wooden vessels.

It came to be called “Naval stores,” a name that stuck even after wooden ships were gone and new uses were for the substance were found.

There were two basic products made from the pine resin, or gum, by a distillation process. One was the chin liquid “oil of turpentine,” which came to be used (in this century) chiefly as an ingredient in such products as paints and varnishes.

The other was the “rosin,” a reddish, translucent substance used for sizing or waterproofing paper products, as a base in var­nishes, in hard soaps, and various other products.

The harvesting and distillation procedures were interesting. It also was hard work for everyone in­volved, especially on a hot summer day. Woods to be harvested were divided into “crops” of 10,000 trees each.

One crop might cover about 50 acres, depending on the density of the pine growth in the area. Each crop had a crew of about five men assigned to harvest those trees and during the summer (when the sap ran easily), it was fulltime work. Some crews might handle several crops, if they were fast workers.

First, a tree would have a “face” cut into it. This was done by scraping through the bark into the sapwood with a sharp tool, either the short handled “hack” or the long “Puller.” The face was either nine or 14 inches wide (depending on tree size) and V-shaped at top and bottom.

The face was first cut from ground level up to 4 1/2 feet high. Tin strips nailed to the face guided the flow of resin into a clay or tin cup nailed at the bottom of the face. As time went on and the resin flow slowed, the face would be extended higher up.

These cups were emptied regu­larly into “dip buckets,” which were in turn emptied into 50 gallon wood or metal barrels. The barrels were hauled on mule drawn wagons either to a still (if the producer had one) or to ramps where they were loaded onto trucks and sent off to be processed elsewhere. One turpentine face could produce for about five years, and the tree would not die if the procedure was done properly.

The stills were fairly simple, operating much like moonshine stills, but on a larger scale. (There were a few years when the turpen­tine stills may have been outnum­bered by the illegal stills.) The resin was heated in a vat, which held eight to 12 barrels, until the turpentine vapors had distilled out into separate barrels. The sticky rosin left in the still was then drained separately and cooled into the hard, brittle form it was sold in. Rosin was graded – the clearer it was, the higher the quality and the better the price.

The rosin and turpentine were usually sent to Jacksonville to be sold. Prices paid varied with qual­ity and the amount on the market at the time. In more recent years, local producers stopped operating their own stills and began selling the raw sap. However, at the time there were at least four stills in the county – at Orange Hammock (in Haw Creek), Favorita, Bunnell and St. Joe (what is now Palm Coast). Sadly enough, no remnants remain.

J. L. (Jimmy) Crews of Bunnell worked in turpentine for 39 years, both in Florida and Georgia. In the earlier days, he was a “woods rid­er,” putting in long hours on horse­back to keep an eye on the men working the crops.

Later he became the biggest turpentine producer in Flagler County, leasing land from timber owners such as George Allen, Sr., Mrs. M. C. Strickland, Sr., and L.E. Wadsworth, Sr. His biggest production period was in the years 1949 to 1951. He recalls that, at one point, he had crews working 335,000 trees.

Crews has fond memories of his turpentining years. He remembers the time he was detained in Chattanooga with a truckload of turpentine by a suspi­cious lawman who couldn’t believe the contents in all those barrels came from pine trees. He likely thought the barrels contained the product of another kind of still, and it took a while to straighten things out, Crews recalls.

They say all good things come to an end and so it seems with the turpentine business in Flagler County. By the late ’50s, production was starting to drop and more timber owners were turning to the profitable alternative of cutting the trees for pulpwood or logs.

Marvin Strickland, Favorita, was one of a handful of producers still turpentining in the early ’70s. He says that a worsening shortage of laborers was the main factor in the decline. Also new processes were developed where turpentine could be extracted from pulpwood and pine stumps, which lessened the need for the traditional collection method. However, Strickland, whose father, M. C. Strickland Sr., was one of Flagler’s leading turpentine producers in the 1930s and ’40s, says there still is a good mar­ket for the resin if a person could find enough workers to harvest it.

With so many other types, of industry, agricultural and other­wise and competition for workers, the prospects for the turpentine business in this part of Florida aren’t good. There are a few operations still being carried on in other counties.

In Flagler, though, the once familiar sight of a wagon load of resin being pulled through the woods by mules is now only a memory of days gone by.

The Flagler County Historical Society is creating a fundraiser to obtain a Sea Turtle to be placed in front of the Holden House Museum as a new member of the Turtle Trail. The theme will consist of a combination of…
END_OF_DOCUMENT_TOKEN_TO_BE_REPLACED
18 Nov