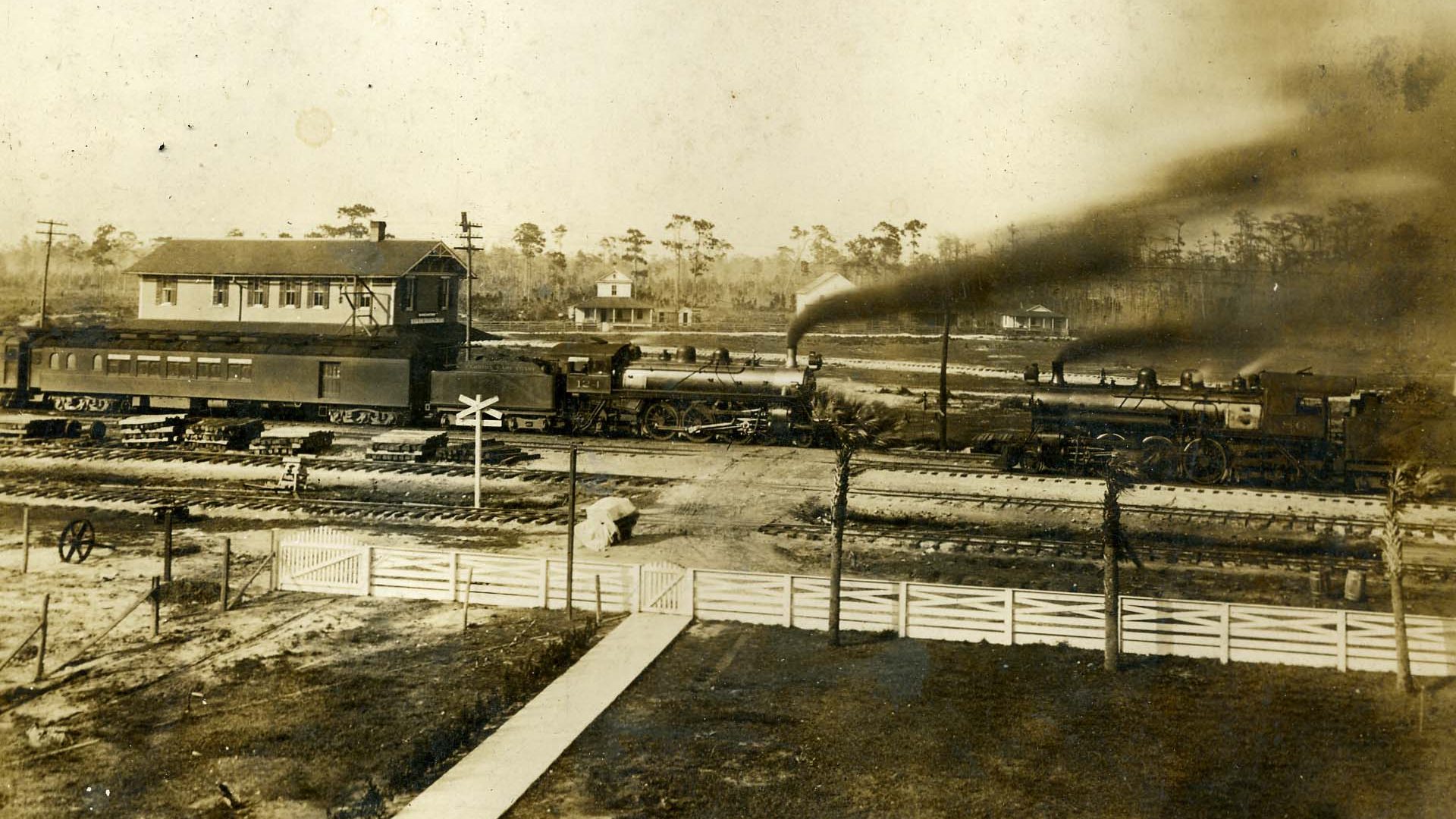 Utley’s first found employment with the Tocoi Railroad Company, which was a horse railroad of the good old days.

In 1872, a 27-year-old young man by the name of Utley James White moved from Brockport, New York to St Augustine. His parents were farmers by occupation, thrifty, energetic, patient and hardy. The maternal grandfather was Walter Phelps, a man of means in his day, who in the early history of New York State, owned a packet line on the Erie Canal and successfully operated it.

Utley’s first found employment with the Tocoi Railroad Company, which was a horse railroad of the good old days. Mr. White acted as master of transportation and as such had charge of the twenty-four head of horses and mules which were the means of locomotion. He hauled all of the people and most of the freight to St. Augustine in this primitive method.

The next year (1873) the Tocoi Railroad was torn up and it was made the first standard gauge road in this part of the south. For three or four years, Mr. White remained in connection with this transportation line. At the end of that time, however, he gave up his position and entered the logging and lumber business.

He hauled his logs over tram roads, the rails of which were made of wood, but subsequently started a steel railroad with the idea of making it a permanent institution and near Palatka built four miles of roadbed himself.

In partnership with W. B. Barnett and S. I. Wales, he incorporated the road, the two gentlemen, beside himself, being the original incorporators. Subsequently, the St. Johns and Halifax Railroad began to build toward the Halifax River and as fast as their means permitted, laid down twelve miles. By Feb 1886, the road was 50 miles in length and ran from Rolleston on the St Johns River, to Hastings, to Dinner Island, to Duke, to Raulerson (Espanola), to Bunnell Stop to Favoretta, and on to the Tomoka River just north of Ormond (just to the east of the present-day River View Grill).

The rails for the S.J. & H Railroad weighed 30 pounds to the yard, and they were laid narrow gauge, three feet apart. The locomotives were wood burners, and had large, bell-shaped stacks, with a screen over the top known as the “spark arrester.” All equipment had link and pin couplers and hand brakes.

In Jun 1886, the Volusia County Board of Commissioners granted a permit for the railroad to build a bridge across the river. Before the Tomoka Railroad Bridge was constructed, passengers were ferried across the river and then hauled in hacks to Ormond. D. K. Bryan held the ferry permit.

Utley interested Stephen Van Cullen White in his railroad venture and with The “Deacon’s” money; Utley completed his railroad to Daytona, Florida in December 1886, later on disposing of the property to good advantage to Mr. Henry Morrison Flagler about 1890.

At this point in time, Mr. White’s interests in Flagler County fade away as he invested the purchase price of his railroad from Mr. Flagler into a twenty-six thousand acre tract of land at Hastings in St. Johns County. He owned this immense tract alone and soon after he had acquired it began to dig ditches and started development along other lines and by practical experience garnered information as to the suitability of the land for various grains and vegetables.

Mr. White will be back in Flagler County as a developer later on in this piece.

Is Flagler where you want to live 20 years from now? We are about to lose our heritage and sense of place.
END_OF_DOCUMENT_TOKEN_TO_BE_REPLACED
01 Apr

It’s finally here! In celebration of the latest census release, here are some facts about the United States 1950 Census and why it’s important! Saturday, April 1 was the “official census day” in 1950. The U.S. Census is required by…
END_OF_DOCUMENT_TOKEN_TO_BE_REPLACED
30 Mar