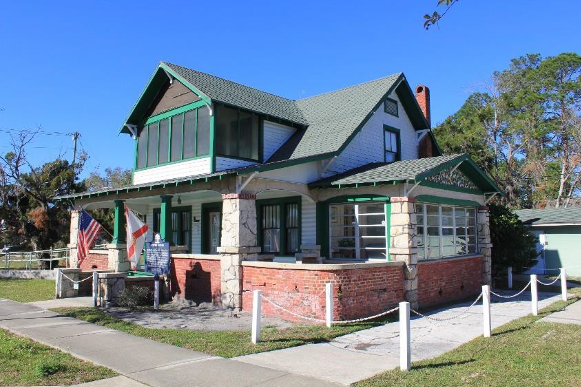 The Holden House (Figure 1) was built in 1918 by Samuel Merwin Bortree (1859- 1918) as a wedding gift for his daughter Ethel Lura Bortree Holden (1892-1977) (Figure 2), and her husband Tom Edward Holden (1892-1974) (Figure 3). The house is located at 204 East Moody Boulevard, Bunnell, FL. The Holden’s had two daughters, Altajane Caudill (1919-2007), and Eleanor “Tommie” Black Shutt (1926- 2017), who were raised in the house. Both daughters became pharmacists following in their father’s footsteps. A Florida Heritage Site sign (Figure 4) was placed in front of the house in 2004. It was sponsored by the Flagler County Board of County Commissioners and the Florida Department of

State. Now that the Holden House is entering into its second century of existence it is one of the oldest houses still standing in Bunnell.

A Brief Narrative about Tom Holden

Tom Holden was born and raised in Palatka, FL and moved to Bunnell in 1914. He was a pharmacist, businessman, realtor, community activist, politician and a good neighbor. In 1916, he purchased the Smith Drug Store in Bunnell and began operating a pharmaceutical business in the same building under the name of Holden’s Pharmacy. In 1920, he was elected Mayor of Bunnell. In 1924, he was named a School Trustee of Bunnell High School. In 1926, he opened the Holden Realty Company in Bunnell. In 1930, he built a new brick commercial building in Bunnell where he moved his Holden’s Pharmacy and cold drink business (which he operated until he sold it in 1951). In 1938, he became a director of the Citizens Bank of Bunnell and later became its Executive Vice President.

During the early to mid-1900s medical doctors were scarce in the Bunnell area. This was especially true in the area’s segregated black communities which relied on Tom Holden for both pharmaceutical and medical services as he would make house calls when needed. He was a member of the Order of Eastern Star, Bunnell Lodge #200 Free & Accepted Masons, and an Ambassador of the Morocco Temple of Jacksonville. He also served as a director of the Federal Housing Agency in Flagler County. In 1967, he was honored by the Florida State Pharmaceutical Association for his 50 years as a registered pharmacist.

The style of the house is called Craftsman Bungalow which was a popular architectural design in the United States from 1900 to 1930. Craftsman Bungalow style houses are known for their many fine details and excellent workmanship. The style was influenced by earlier homes that were built in India by British colonists. This house style is defined by features that include wood construction, a low-pitched gabled roof with broad eaves, large front porches, practical floor plans (Figures 5 and 6), plastered ceilings, a fireplace and casement windows. A unique feature on the house was the use of colorful pieces of apothecary1 bottles that were inset in the front gable (undoubtedly due to Tom Holden’s career as a pharmacist). When the sun porch was added, sometime in the 1930s, the gable was inset with an array of multi-colored antique glass, broken dishes and at least one automobile tail light (Figure 7) in an attempt to make it look similar to the front gable’s original design.

Originality of the Holden House

Fortunately, the Holden House, now at 100 years old, is mostly in original condition. The locally quarried coquina rock along the front porch is original. The sash windows are replacements. The chimney on the southwest side of the house was replaced a few years ago because roofers performing repairs accidently knocked some of it down. The fireplace in the living room originally contained a kerosene stove that heated the house during the winter. The Holden’s had residential air conditioning and heating installed in the house in the 1950s after Tom retired. The wood trim and most of the interior doors are original to the house as is the plate rail in the dining room. The kitchen sink and appliances have all been replaced but the wood cabinets are original. The breakthrough between the kitchen and dining room is original and was used for family gatherings and social events. Some of the downstairs pine wood flooring was damaged by termites and had to be removed. It was replaced by removing and installing the same undamaged wood flooring from closets on the second floor. The upstairs bathroom was one of the first indoor bathrooms in the Bunnell area and featured small hexagon tiles on the floor which were similar to the design used in Holden’s Pharmacy. The downstairs bathroom and the sun porch were both added years after the house was built. One of the charming original features of the second floor is an outside screened porch accessed through the master bedroom.

The Holden’s lived in the house until the early 1970s. The event that prompted the house’s sale to Flagler County occurred on Saturday, February 2, 1974, when the original Flagler County Court House was firebombed with “Molotov cocktails” made of beer bottles filled with gasoline. The ensuing fire destroyed the county commission meeting room, various court documents and caused additional damage to the structure. The county required temporary office space until repairs could be made and purchased the Holden House in 1979. It was used for the county finance department and traffic bureau, and the

There were two times during the history of the Holden House that it was under threat of demolition. During the late 1970s, it was in disrepair but after three architects inspected the house and deemed it functionally sound Flagler County funded necessary repairs. In 1988, the Bunnell City Commission wanted the house condemned, and the county wanted the property for a parking lot. But, a $57,000 historical grant from the State of Florida was awarded and used to renovate the house.

The FCHS now manages the Holden House as a museum and uses it as their headquarters. The house includes various pieces of period-correct furniture, home accessories and dishes. The dining room’s plate rail features many eye catching pieces of ruby red Depression glass3 (Figure 8). There are also some Holden family artifacts and pictures that were donated by members of their family. One prominent recent addition to the museum is a scarce top-of-the-line (1 of 4 known) circa 1898 Theodore B. Starr retailed 3-weight hall (grandfather) clock that features an English-made J.J. Elliott movement, dial, weights, hand-painted moon phase dial and one-jar mercury pendulum with nine patented Harrington tubular bells. This donation originated from the Cocoa Beach estate of Howard Stone in 2016, and was coordinated by the Daytona Beach Chapter 1544 of the National Association of Watch and Clock Collectors (NAWCC) who financed, restored, serviced, delivered and set the clock up in the living room (Figure 9). The Holden House Museum is currently open on Wednesdays from 10:00 am to 1:00 pm and public tours are available during this time. Several meetings and special events are also held in the house during the year.

Directly behind the Holden House is a green rectangular concrete block building that is operated by the FCHS as a museum, document repository and research library. Artifacts housed in the Annex (Figure 10) include: furniture, clothing, over 125 matted and framed historical photographs of early Flagler County, more than 6,000 alphabetized area obituaries, bound volumes of the Flagler Tribune (1918-1980), copies of the Bunnell Home Builder (1912-1918), shards of native American pottery, turpentine industry tools and equipment, history books, early Florida maps, individual files containing information on Flagler County places and organizations, and a searchable family data base of more than 235,000 names from Southern Georgia to Northern Florida.

1 Apothecary (pronounced ə-ˈpä-thə-ˌker-ē) – a person who prepares and sells drugs or compounds for medicinal purposes (a druggist or pharmacist).

2 The Flagler County Historical Society was chartered as a Florida nonprofit corporation on October 25, 1983, and has a mission to promote historical and cultural research and education for the benefit of the surrounding communities.

3 Depression glass was made from the late 1920s through the early 1940s (during the Great Depression). It was manufactured by companies including Federal Glass, MacBeth-Evans and Hocking Glass. This mass-produced molded glassware was inexpensive and of relatively poor quality as flaws such as air bubbles and heavy mold marks are common. The glass came in many beautiful colors including amber, green, pink, blue, red, iridescent, opaque and white known as Monax. It was also made in various patterns including Cameo, Mayfair, American Sweetheart, Princess and Royal Lace.

4 Information regarding the Daytona Beach Chapter 154 of the National Association of Watch and Clock Collectors (NAWCC) can be accessed at: www.nawcc154-daytonabeach.com

FCHS plans for 2022. Thinking of our history in a new way. Strategic plan for history tourism. Recognizing our history assets.
END_OF_DOCUMENT_TOKEN_TO_BE_REPLACED
28 Dec

November 2021 - Thanksgiving at the Holden House. Foods and recipes from the past.
END_OF_DOCUMENT_TOKEN_TO_BE_REPLACED
01 Oct

Ode to Bunnell, our 'MacGyver',Songs of Bunnell, Work Days are coming!
END_OF_DOCUMENT_TOKEN_TO_BE_REPLACED
20 Sep

Historical Events and People in August to September 2021
END_OF_DOCUMENT_TOKEN_TO_BE_REPLACED