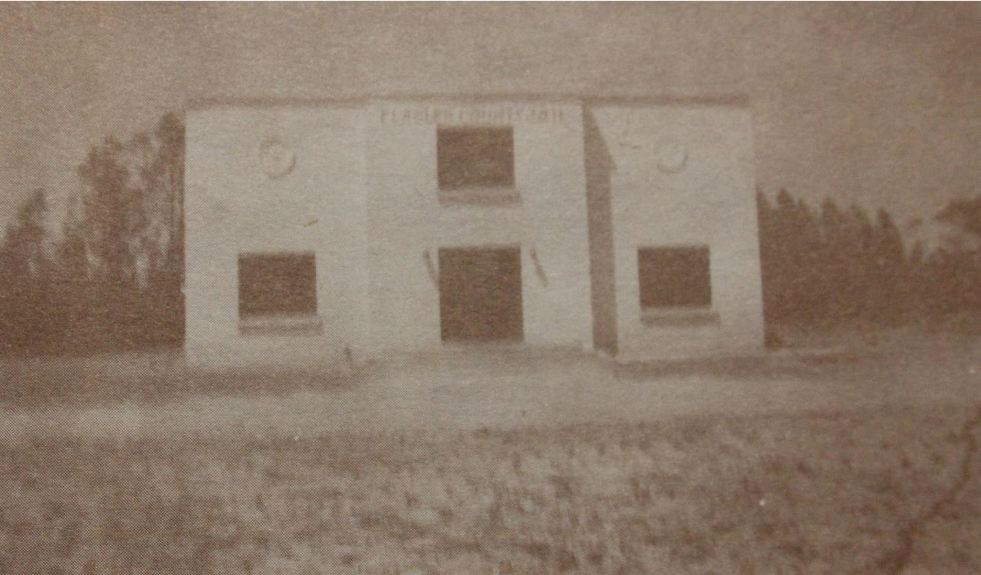 During 1938, between the Flagler County Board of Commissioners and the Works Progress Administration (WPA) an agreement to build a new Flagler County Jail building was approved.

In a January 19, 1939 article in the Flagler Tribune1 it was reported that the facilities for housing prisoners in Flagler County was “…the subject of discussion for successive grand juries in past years, the bodies making various recommendations for repair to the present building or the erection of a new one.” It was apparent that the concrete block Flagler County jail building, which once stood on the property that now houses the Flagler County Court House, locally known as the “Stockade”, was in dire need of remodeling or complete replacement.

After months of negotiations, during 1938, between the Flagler County Board of Commissioners and the Works Progress Administration (WPA2) an agreement to build a new Flagler County Jail building was approved. The cost of WPA Project No. 4242 was approximately $24,000 (which is $433,784 in 2019 dollars) and was divided between Flagler County and the WPA.

The construction project took one year to complete and Z. D. Holland, representing the WPA, officially transferred sole responsibility of the finished building to Flagler County on February 2, 1940. The Flagler County Commissioners turned the keys to the building over to Flagler County Sheriff Ernest Walton “E.W.” Johnston4 who moved the county’s sheriff department into the new building and officially opened the jail.

The two story poured concrete building (Figure 1) contained 6337 square feet and was alleged to be fireproof. The first floor included an entrance lobby, heating and storage room, living quarters for the sheriff and a prisoner’s kitchen. The second floor included rooms for the guards and space to house 22 prisoners (Figure 2).

During subsequent years following the opening of the building there were several renovations to the building. In 1965, an east wing was built for additional administration functions and for juvenile operations, and in 1975, a west wing was built which added an additional 24 beds, provided a separate dining area and allowed space to be allocated in the east wing for a dedicated area to house female prisoners. Other renovations included fencing, high intensity lights, light poles, aluminum and wood canopies and concrete pavements were added onto and around the building (Figure 3).

The building served as the Flagler County Jail from 1940 until the 1980s when a newer and larger building with 132 beds and a women’s wing was completed.

During the 1940s into the 1960s, racial segregation mandated that the Flagler County Jail incarcerate white prisoners only (despite the fact that half of its construction funding came from federal dollars). During this period of racial segregation, black prisoners were incarcerated across the street in the older concrete block Flagler County Jail “Stockade” building.

The WPA-Built Flagler County Jail building was part of the group of Florida structures that were built for distinct public uses during the Great Depression (New Deal-era). These types of structures represent a small percentage of the buildings that were constructed during this period, but are important property types because they summarize the design creativity for specific usages for public facilities. The structures are also historically significant because they represent the first time that United States governmental agencies were linked to state and local agencies to provide mass employment that stimulated local economies and resulted in upgrading many facets of the national infrastructure. Florida’s New Deal heritage is characterized and lives within these structures.

According to the United States Department of the Interior, National Park Service, National Register of Historic Places – Applicable National Register Criteria – the building potentially qualifies as: “[A] – Property is associated with events that have made a significant contribution to the broad patterns of our history”; and “[C] – Property embodies the distinctive characteristics of a type, period, or method of construction or represents the work of a master, or possesses high artistic values, or represents a significant and distinguishable entity whose components lack individual distinction.” 7

If the Flagler County WPA-Built Jail was kept standing and nominated for addition onto the National Register of Historic Places the building would be have been submitted on a multiple property document form under Florida’s New Deal Resources.

In 2003, a Flagler Times article titled City Celebrates 90th Birthday reported that “Many of the lifelong residents of Bunnell attest to the stability of this building stating it was built like a bomb shelter…and can withstand just about anything.”

Obviously, this building (Figures 4 & 5) was an important link to Flagler County’s past and should have been respected as such. It served Flagler County communities through some of the most turbulent eras in U.S. history (the Great Depression, Jim Crow laws [racial segregation] World War II, the Korean and Vietnam Wars and the Civil Rights Movement).

In 2019, the Flagler County Commissioners decided that the WPA-Built Flagler County Jail building was a liability and needed to be demolished, and unanimously approved a demolition contract for $19,150.

Prior to the demolition photographs were taken in early June 2019 of the inside of the jailhouse building by Amy Stroger of the Flagler County Engineering Department (Figures 6, 7, 8 & 9).

Many local citizens, activists and historians were convinced that this building should have be left standing so current and future generations could learn from its unique history and respect it as a time capsule from the area’s past. Nevertheless, the demolition started in June and continued into July of 2019 (Figures 10, 11, 12 & 13).

Flagler County officials did salvage two of the original cell doors for future archival or museum use. In addition, a jailhouse barred window frame and two bricks were salvaged from the rubble and are now in display at the Flagler County Historical Society’s museum in the Holden House Annex building (Figure 14).

Various Flagler County residents who stopped by to witness the building’s demolition salvaged some bricks as keepsakes as well.

2 The Works Progress Administration (WPA) was created on May 6, 1935 by an executive order signed by President Franklin D. Roosevelt. It was part of his administration’s New Deal plan to boost the economy and lift the country out of the Great Depression. It provided relief for the unemployed by creating jobs for millions of people. Most of the people hired were unskilled men who worked on infrastructure and public works projects. In 1939, it was renamed the Work Projects Administration. In 1941, as the United States entered World War II the country’s unemployment was almost eradicated, and as a result, the WPA began scaling down and officially ended on June 30, 1943.

He attended the University of Florida and worked part time for the Gainesville Fire Dept. He worked in turpentine, timber and pulpwood and was supervisor for the Works Progress Administration for Flagler County, building the Bunnell Civic Center and the Flagler County Jail.

He was elected for three terms as Superintendent of Public Instruction of Flagler County. His first term was interrupted when he entered the U S Army during WW II in the Tank Destroyers Division.

4 Ernest Walton “E.W.” Johnston (1884-1966) – Was the first Flagler County sheriff and served two times, his first term lasted from 1917 to 1925, and his second term lasted from 1937 to 1941. Johnston started his law enforcement career as the first Town Marshall in Bunnell. He was also a deputy sheriff in St. Johns County where his territory was the familiar present-day Flagler County area. He was appointed Flagler County sheriff and officially assumed the role on July 9, 1917. After leaving the Flagler County Sherriff’s office, in 1925, he was appointed assistant Fish and Game Commissioner with a territory covering most of the south and east coast of Florida. In 1936, he again entered the Flagler County sheriff race and was elected after being away from the office for 11 years. In 1941, Florida Governor Millard Caldwell (1897-1984) appointed him as County Judge, a position he held until retiring in 1956.

5 Masonry Vernacular is an architectural style that is based on local traditions and needs and uses readily available construction materials. Many vernacular structures were built and designed by local builders who had no formal architectural education. The function of the building is the dominant factor in this architectural style. Note: Since the WPA-Built Flagler County Jail was built during the New Deal-era by the WPA its architectural style could possibly be classified as WPA Rustic, which is a term used by the National Park Service’s National Register of Historic Places program to classify many buildings and structures that were built by the WPA in the 1930s and early 1940s.

The Flagler County Historical Society is creating a fundraiser to obtain a Sea Turtle to be placed in front of the Holden House Museum as a new member of the Turtle Trail. The theme will consist of a combination of…
END_OF_DOCUMENT_TOKEN_TO_BE_REPLACED
18 Nov