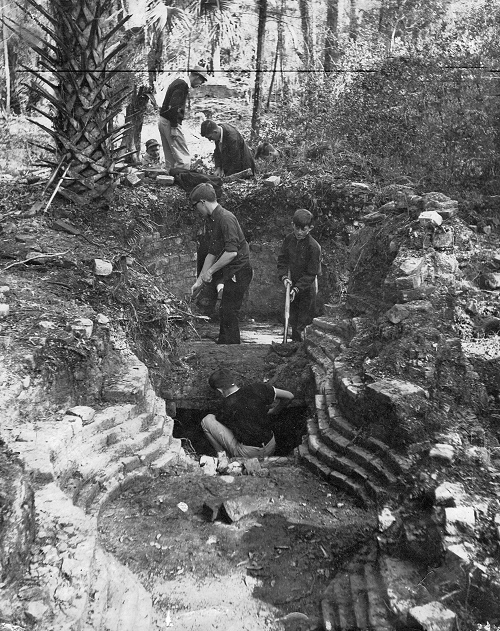 Joseph M. Hernandez born in St. Augustine, 1786, of Minorcan parents, was well-known and respected in Spanish Florida, is the most distinguished coastal planter of his time. He was schooled in Savannah from the age of fifteen and thence went to Havana to read law, returning to St. Augustine in 1811 where he took up legal practice. He was quickly accepted by the plantation gentry and other aristocracy, making an excellent position for himself by his industry, native intelligence and by a most auspicious marriage with Anna Maria Hill, beautiful and wealthy widow of Samuel Williams, Esq., whose plantation, “Orange Grove,” was located on land that was purchased by Matthias Day in 1870. The Williams grant formed the nucleus of what was to become Daytona. When in 1821 Florida came under the American flag, Hernandez transferred his citizenship from Spain to the United States and by 1822 was appointed by President Monroe to the first Legislative Council, being named by Monroe “one of the thirteen most fit and discreet men of the territory.” Almost immediately thereafter he was elected by the territory as its first delegate to Congress, taking his seat in the second session of the 17th Congress at the age of thirty-five. Another honor bestowed on him was that of President of the Agricultural Society of St. Augustine, a position his experience as a very large and important landowner had qualified him to fill. He had property both in St. Augustine and in the area not too distant. The three chief plantations were Bella Vista, Mala Compra (Bad Bargain), and St. Joseph’s, all bordering the Matanzas for five or six miles south of Pellicer Creek.

Today, the ruins of the St. Joseph sugar mill is on the property that has recently been purchased by a land development company. These beautiful and unusual ruins are in a series of levels running down a hillside that extends nearly two hundred and fifty feet. In A. J. Hanna’s book; Florida’s Golden Sands. St. Joseph is described as follows: “Its fields were scientifically drained by canals from five and seven feet wide, with identical depths and from one-half mile to one and one-half miles in length. Two hundred acres were cross-ditched with ditches two feet wide and two deep and separated by a distance of thirty- five feet. Causeways, bridges, and roads completed this ambitious project. The coquina-rock curing house at St. Joseph’s was sixty-seven feet by thirty-one with division walls, cemented and plastered for four molasses cisterns. This house was connected with a coquina-rock boiling house, forty-one by thirty-two feet, arranged for two sets of kettles; these were four double and two single coolers made of white pine. Two double receivers with a capacity of 750 gallons conveyed the raw juice from the mill to the receivers.

“The engine house was thirty by twenty feet and twenty-five high; its equipment included one ten-horsepower rotary-valve engine and boiler and one horizontal roller mill for grinding cane. St. Joseph’s was considered “the most valuable plantation soil wise, in Florida,” by a former Bahaman sugar planter who described it in the Farmer’s Register of 1835. “Hernandez had with great perseverance and success overcome the laborious difficulties of clearing and draining new land, and has under culture upwards of 200 acres of these swamplands.” The judgment of this observer was that the swamp-lands of East Florida and especially those lying on the branches of the Matanzas and Halifax Rivers are superior in strength and character for the production of sugar to the most valued lands of the West India Islands.” During the Seminole War, Hernandez was named Brigadier General and mustered a brigade of militia for the purpose of protecting St. Augustine and Jacksonville and the settlements along the St. Johns River. Later, his military activities brought him the only blot upon his otherwise splendid record. His capture of Coacoochee and Osceola under a flag of truce, however, was not done with his approval but has been established as an order given him by his superior General Jesup. However, so great was the destruction of the plantations of East Florida by the Seminoles, few were ever re-established, particularly as the United States Government lowered the tariff in sugar from the West Indies. Many of our most successful planters drifted away and the greatly honored and beloved Joseph Hernandez joined the exodus returning to Cuba in the late 1840s or early 1850s–where he died and was buried in Mantanzas June 1856. (original St. Joseph photos on display at Flagler Beach Historical Museum)

The Flagler County Historical Society is creating a fundraiser to obtain a Sea Turtle to be placed in front of the Holden House Museum as a new member of the Turtle Trail. The theme will consist of a combination of…
END_OF_DOCUMENT_TOKEN_TO_BE_REPLACED
18 Nov