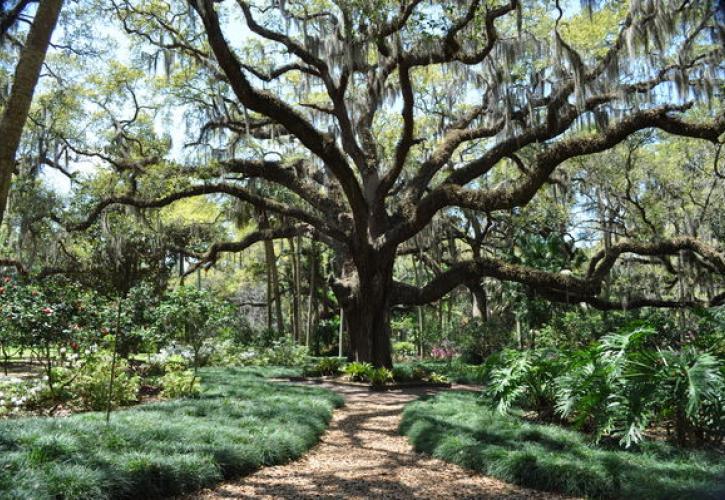 At the beginning of this history, I mentioned General Joseph Marion Hernandez and his Bella Vista Plantation. Bella Vista is now our beautiful Washington Oaks Gardens State Park.

Between 1923 and 1936, the general’s former plantation very nearly became a subdivision.

Charles Minor Washington, the youngest son of George Lawrence and Eleanor Stephens, acquired sole ownership of Washington Oaks from his father’s other heirs in 1914. Charles sold the property in 1923 to Ed and Lillian Johnson.

The Johnson’s rather quickly sold a five-sixteenths interest in the property to L. F. Galloway of Seminole County and another 5/16 to Claude Varn.

In 1926, the Johnson’s and their associates of the Coastal Holding Company transferred title to Section 39 and Section 40 – Bella Vista and most of the old Mala Compra plantation – to the Hernandez Estates Corporation of which Ed Johnson was president.

The land was subdivided and a plat of the Hernandez Estates was filed with Flagler County preparatory to selling tracts to the public. These events were occurring just as the Florida real estate boom began to collapse.

In 1927, Hernandez Estates failed to pay the property taxes on Sections 39 and 40 and all plans for development there came to a halt.

For the next ten years or so, these properties fell into many hands with the selling and buying of tax deeds. On April 7, 1936, Louise P. Clark of Westchester County, NY, the future Mrs. Owen D. Young, purchased Washington Oaks. In 1965, the Young’s donated most of the property to the State of Florida who turned it into Washington Oaks Gardens State Park.

At the time project research began, the known background of Washington Oaks consisted of a mixture of documented information and undocumented stories about the property and its owners. Although there were some kernels of documentable facts embedded in this mixture, the resulting product can best be characterized as a traditional story as opposed to a history of the property. The origins of the major storylines in this tradition remain a mystery. As often happens .in popular history, they probably evolved over the years as one person after another uncritically passed them on, perhaps with a few embellishments. One of the main objectives of the current project has been to sort out fact from fiction in preexisting “history” while trying to understand how the misconceptions grew.

The traditional story of Washington Oaks begins with the acquisition of the property by Joseph Marion Hernandez as a land grant from the Spanish government. The story does not include information about any prior use of that land. According to the next major story element, Hernandez presented Washington Oaks to his daughter Louisa as a wedding gift on the occasion of her marriage in 1844 to George L. Washington. George and Louisa receive credit for constructing a two-story home at Washington Oaks, a home in which they supposedly lived for over a decade. What use they made of the land use is not discussed in this version with one exception. The story reports that the Washingtons put in an artesian well just before they moved to North Carolina in 1856.

The popular “history” of the property suggests that George L. Washington returned to the area in his later life and lived at Washington Oaks with his oldest son, George L. Junior, who died at the family residence there in 1892. Two years later, so the story goes, the elder George also passed away, leaving the property uninhabited and unused for many years. One local tradition relates that the Washington residence at Washington Oaks burned early in the 19005, while’ another version suggests that the house there survived until the 19205. The story then jumps to the acquisition of the property by Owen Young without accounting for any events of .the early 20th century relating to Washington Oaks.

The current research aimed at substantiating these “Washington Oaks” traditions produced instead strong evidence negating much of this story.(2)

In actuality, he owned only half an interest in that land; his deceased wife’s estate held the other half interest in “Bella Vista.” Joseph Hernandez instructed his executors to sell that property as soon after his death as probate legalities would permit and to give half the proceeds of that sale to his daughter Louisa Washington; the other half of the proceeds were to be applied to Hernandez’ account” with his wife’s estate. At the time that will be made (April 1856), George and Louisa Washington already had moved to North Carolina. It seems very unlikely that they or Hernandez ever erected a dwelling on Washington Oaks.

Joseph Hernandez died in 1857; his daughter Louisa Washington lived only until the spring of 1859. Since her father’s estate remained open for many years because his properties were so heavily encumbered with debts, Louisa never received her inheritance. Late in the 1870s, the estate executor petitioned the courts for permission to sell Washington Oaks and other Hernandez estate properties in order to pay outstanding obligations. Another of Hernandez’ daughters purchased the land at that time. It is possible that Louisa’s heirs received the half share of the proceeds of that sale as instructed in Joseph Hernandez’ will; no information was found to support or negate such an event.

Late in the 1880s, George L. Washington actually bought Washington Oaks. Research produced information suggesting that perhaps he actually began to use the property in the mid-1870s through some sort of family agreement. It is clear that someone had built a house at Washington Oaks by 1887. In all probability, George Washington constructed that house between 1875 and 1880 as a sportsman’s retreat for himself and country home for Ernest Washington, his youngest son from his marriage to Louisa Hernandez.

Ernest apparently did not remain in residence at “the Washington place” for too long, but the Washington family seems to have continued to use the property as a Florida retreat for some time. George L. Washington, Jr., did indeed die at there in 1892, having lived there for about two years prior to his death. His father, George, Sr. died elsewhere in 1894. The Washington heirs remained in possession of the project tract until late in 1923. Research produced no evidence indicating clearly when the main residence at Washington Oaks burned; accumulated information and map evidence supports the acceptance of the later “popular history” date for that event (in the 1920s) as opposed to an earlier date of circa 1903.

In’1923, the property was sold to unrelated parties who planned to develop that land and some adjacent property into “a subdivision called “Hernandez Estates”; The collapse of the

Florida’s land boom in the mid-1920s and the national depression of the 1930s prevented that plan from becoming a reality. After Louise P. Clark (the future Mrs. Owen D. Young) received title to the property in 1936, the property began to be referred to as “Washington Oaks”.

Is Flagler where you want to live 20 years from now? We are about to lose our heritage and sense of place.
END_OF_DOCUMENT_TOKEN_TO_BE_REPLACED
01 Apr

It’s finally here! In celebration of the latest census release, here are some facts about the United States 1950 Census and why it’s important! Saturday, April 1 was the “official census day” in 1950. The U.S. Census is required by…
END_OF_DOCUMENT_TOKEN_TO_BE_REPLACED
30 Mar