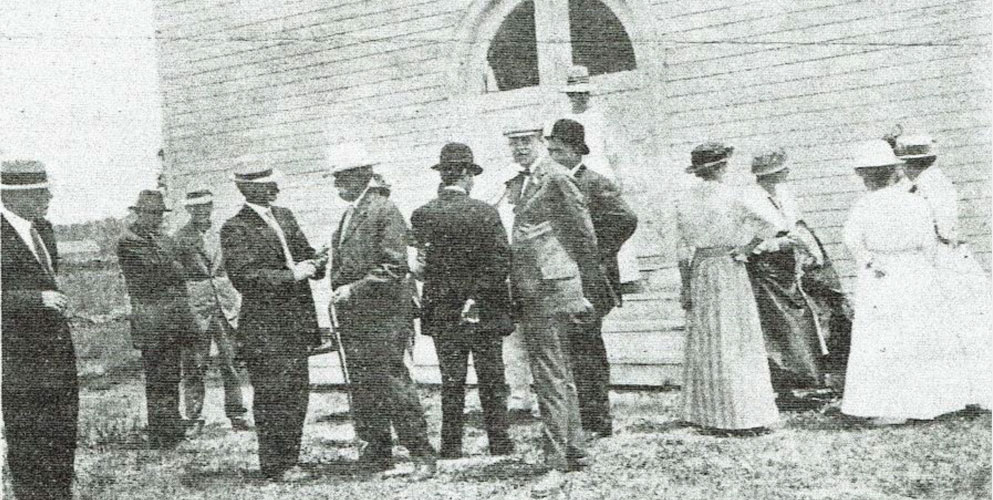 The construction of the St. Mary Catholic Church was directed by Rev. Baczyk and built by Izydor Waszwski. Completed in 1914, the sanctuary seats 65 and the first mass was held on May 3, 1914.

The town of Korona was originally created by the Bunnell Development Company1 to sell land mainly for farming and homestead purposes. It was settled in 1914 by Polish families, predominantly farmers, who came from northern U.S. cities including Chicago and Detroit. From 1914 to 1917, Korona was located in the northern section of Volusia County (Figure 1). On April 28, 1917, the northern section of Volusia County, including Korona, and the southern section of St. Johns County became parts of the newly established Flagler County. Today, Korona is a small unincorporated community located in southern Flagler County.

One of the reasons why Polish settlers moved to Korona was likely due to advertisements, some printed in Polish, (Figure 2) that the Bunnell Development Company used in their monthly publication, The Bunnell Home Builder, which promoted land as inexpensive as $35 per acre and the potential for a year-round growing season. The Bunnell Development Company also chartered a train called the Dixie Flyer and sponsored round trips from Chicago to Bunnell for $41.89 (Figure 3), so people could travel to the area inexpensively. After several Polish families decided to relocate they formed a committee and raised $1000, prior to moving to Florida, to build a church in the town of Korona that was to be named St. Mary, Queen of Poland, Catholic Church (later changed to St. Mary Catholic Church). The first 35 families including Cyzycki, Mazurewicz, Strach, Stupecki, Trojanowski and Waszewski arrived in the Korona area early in 1914. They built homes and farms but struggled to make a living as the land was harsh, full of mosquitoes and other insects, lacked adequate roads and farming tools and drainage problems caused many crops to fail. Some of the original Polish settlers returned to northern cities before the drainage problems were solved.

The architectural style of St. Mary Catholic Church (Figure 10) is Carpenter Gothic (sometimes referred to as Carpenter’s Gothic and Rural Gothic). This architectural style was popular in North America in the late 1800s and early 1900s and was mostly confined to small domestic buildings, outbuildings and small churches.

The interior of the church (Figures 11-14) features solid wood pews (long benches with backs) on each side of the central aisle, a staircase to the choir chambers (which is no longer in use due to questionable stability of the upper walls), and a pulpit. Various statues, pictures and other church-related artifacts adorn the interior spaces.

Most of the exterior left wall of the building is considerably buckled due to debilitation of the foundation. There is some water damage evident on the interior ceilings (Figure 15), and there has been some past termite activity which have contributed to the weakening of the structure. The church now has regular pest control spraying, so hopefully no additional damage due to insects will occur.

The building is now waiting for a structural engineering inspection and analysis that will most likely determine its future. Hopefully, the Roman Catholic Diocese of St. Augustine (the official owner of the St. Mary Catholic Church in Korona) will be able to allocate funding to repair the building, now more than 100 years old, so future generations can enjoy this important historical link to Volusia and Flagler County’s past.

1 The Bunnell Development Company was chartered in June 1909 and maintained offices in Bunnell, Florida and Chicago, Illinois. In December 1912, the Chicago office began the publication of a monthly periodical called The Bunnell Home Builder. This periodical had the slogan “The Truth about Florida” which ran stories, in English and Polish, of inexpensive land,

no snow or ice and a fabulous year-round growing season that the Bunnell area had to offer. The company sponsored a special chartered train called “The Dixie Flyer” and charged $41.89 for a round-trip from Chicago to Bunnell for perspective land buyers to visit the area. They also owned a hotel in Bunnell named the Bunnell Hotel (later the Halcyon Hotel) that accommodated up to 75 guests at $3 per night for a room.

2 The Florida East Coast Railway (FEC) was incorporated in 1885 by Henry Morrison Flagler (1830–1913) a business magnate, real estate developer and partner of John D. Rockefeller (1839–1937) in Standard Oil. Flagler had a vision to modernize the east coast of Florida with a solid transportation system. He purchased various local railroads in the northeast Florida area including the Jacksonville, St. Augustine and Halifax River Railway (JStA&HR), the St. John’s Railway, the St. Augustine and Palatka Railway, and the St. Johns and Halifax River Railway and converted them into standard gauge. By 1889, FEC had railroad service connecting Jacksonville to Daytona. In 1912, the Over-the-Sea Extension was completed which cost $50 million and connected the entire east coast of Florida to Key West. Its construction cost the lives of hundreds of workers. The FEC is still operating today but ceased passenger service in 1968. Currently, its major income-earning source is rock trains which primarily transport limestone.

3 Gothic architecture originated in the 12th century in France and spread around Europe lasting into the 16th century. This architectural style is known for its pointed arches, ribbed vaults, and flying buttress features. Many of the great cathedrals, abbeys, castles, palaces and churches of Europe were built using Gothic architecture styling. It is also the architecture style of many less prominent structures including town halls, guild halls, universities, private dwellings and smaller churches.

FCHS plans for 2022. Thinking of our history in a new way. Strategic plan for history tourism. Recognizing our history assets.
END_OF_DOCUMENT_TOKEN_TO_BE_REPLACED
28 Dec

November 2021 - Thanksgiving at the Holden House. Foods and recipes from the past.
END_OF_DOCUMENT_TOKEN_TO_BE_REPLACED
01 Oct

Ode to Bunnell, our 'MacGyver',Songs of Bunnell, Work Days are coming!
END_OF_DOCUMENT_TOKEN_TO_BE_REPLACED
20 Sep

Historical Events and People in August to September 2021
END_OF_DOCUMENT_TOKEN_TO_BE_REPLACED